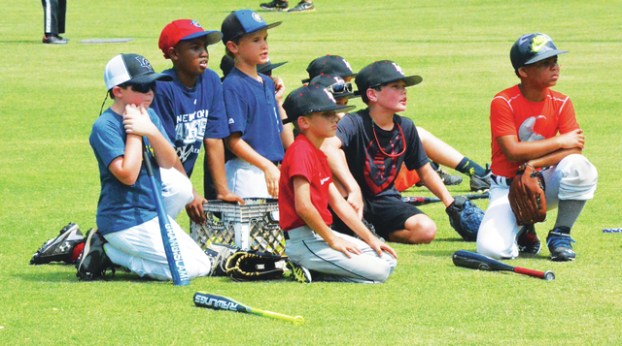 LAGRANGE – David Kelton wanted the parents to get a first-hand look at what their children learned during the week.

Kelton, LaGrange College’s head baseball coach, offers a youth camp each summer, and he decided to change things up a little bit this year.

Kelton invited the parents to come to LaGrange College’s baseball stadium on Friday for the final day of the week-long camp session.

With the parents in the stands at Cleaveland Field at Williamson Stadium, he had the campers provide a demonstration of some of the things they learned during the week..

The campers, who ranged in ages from 5 to 13, were instructed in all sorts of the fundamentals of the sport, from the correct way to bunt, to the proper way to throw the ball.

“That’s what it is. It’s a fundamental camp,” Kelton said. “You give them a foundation.”

The campers stood about five yards apart and went through a series of drills showing what they learned during their 15 hours of instruction time.

“It allows the parents to see all the things they worked on throughout the week,” Kelton said. “It shows they listen. And they did a great job.”

Also this year, Kelton decided to name a camper of the week for the first time, and he’ll do the same thing at the close of next week’s camp session.

For last week’s camp session, Davis Moncus was the camper of the week, and Kelton said that was a well-deserved honor.

“He’s that kid that just eats it up,” Kelton said. “He’s one of those you just want to reward.”

Kelton said Moncus has a bright future in the sport.

“He’s been with us since he was 5-years-old,” Kelton said. “He’s progressed each year. He’s got a tremendous amount of talent.”

Kelton said everything about the camp was a home run, from the weather to the attitudes of the campers.

“It went well,” he said. “The weather helped out tremendously. It was a good group. They were very little issues whatever. I was highly pleased.”

Helping Kelton out during the week was Nick Beamenderfer, a Pennsylvania native who has been an assistant coach at LaGrange College for three years.

Al Bell, who teachers elementary school physical education in DeKalb County, was a camp instructor for the 14th consecutive year.

Kelton, who recently completed his third and most successful season as the Panthers’ head coach, led the camp.

LaGrange College went 30-13, which was the fifth most wins in program history.

Kelton was an all-state player at Troup High, and he went on to play minor-league baseball for nearly a decade before turning to coaching.

He was the head coach at Springwood School in Lanett in 2007, and he then joined the LaGrange College staff.

Kelton was an assistant coach under Kevin Howard before taking over as head coach before the 2013 season, and he has continued to offer the camp each summer.

This summer marked the first time Kelton had a family connection at the camp.

His daughter, Mary Elliott, was one of the campers, and his son Grady will be attending the camp in the next year or two.

Some of the campers show off their hitting form at the close of Friday’s session. Kevin Eckleberry | Daily News

http://lagrangenews.com/wp-content/uploads/sites/37/2016/06/web1_LCcamp10.jpgSome of the campers show off their hitting form at the close of Friday’s session. Kevin Eckleberry | Daily News

The young players had a good time on Friday, which was the final day of the five-day camp. Kevin Eckleberry | Daily News

http://lagrangenews.com/wp-content/uploads/sites/37/2016/06/web1_LCcamp6.jpgThe young players had a good time on Friday, which was the final day of the five-day camp. Kevin Eckleberry | Daily News

Davis Moncus was named the camper of the week for the LaGrange College baseball camp that wrapped up on Friday. With Moncus is LaGrange College head coach David Kelton, along with assistant coaches Nick Beamenderfer and Scott Mularz. Kevin Eckleberry | Daily News

http://lagrangenews.com/wp-content/uploads/sites/37/2016/06/web1_LCcamp1.jpgDavis Moncus was named the camper of the week for the LaGrange College baseball camp that wrapped up on Friday. With Moncus is LaGrange College head coach David Kelton, along with assistant coaches Nick Beamenderfer and Scott Mularz. Kevin Eckleberry | Daily News

HOGANSVILLE – Tis the season to go camping. For the Callaway Cavaliers, a major part of the summer routine involves... read more