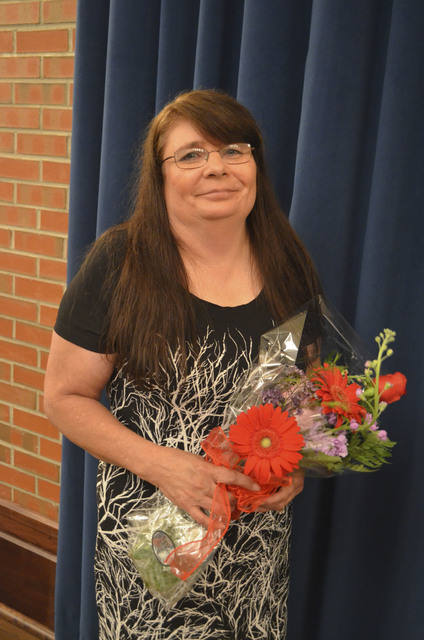 LAGRANGE — WellStar West Georgia Medical Center has named Debbie Jarrell, a housekeeper in the Emergency Department and on several patient floors, as its 2016 Team Member of the Year.

“In the past, many of our Team Members of the Year had been working at West Georgia Medical Center for years before being honored,” said WGMC President Jerry Fulks. “Debbie has been here for less than five years, but she already has made a lasting impression on our health system and the patients we serve.”

Fulks said Jarrell is known for making sure WGMC patients have the best possible experience at the hospital.

“Her commitment to customer service is one of the reasons that has led to her receiving this honor,” he said, “and it is one incident in particular that led us to realize the depth of her commitment.”

WGMC team members are taught to introduce themselves to patients by using what is known as “AIDET,” a customer service practice of acknowledging the patient, introducing oneself, offering the expected duration of a procedure or wait time, explaining what will happen next and thanking the patient.

Jarrell always uses AIDET when she enters a patient’s room, and one day several months ago, her AIDET training actually helped save a patient’s life, Fulks said.

As she entered a patient’s room, she introduced herself just like always, but this time the patient didn’t respond to her. Because he didn’t respond, she proceeded to his bedside, gently touched his arm and spoke to him once again.

It was at this point she recognized the patient wasn’t breathing. She went into the hallway to initiate a Rapid Response call to the clinical staff. The clinical team immediately responded.

“Had Debbie skipped her AIDET routine of acknowledging the patient and introducing herself, this patient’s outcome could have been very different,” Fulks said. “Thanks to her, the patient was revived and was able to return home within a few days.”

WellStar West Georgia Medical Center named Debbie Jarrell, a housekeeper in the Emergency Department and on several patient floors, as its 2016 Team Member of the Year.

http://lagrangenews.com/wp-content/uploads/sites/37/2016/06/web1_DebbieJarrell.jpgWellStar West Georgia Medical Center named Debbie Jarrell, a housekeeper in the Emergency Department and on several patient floors, as its 2016 Team Member of the Year.