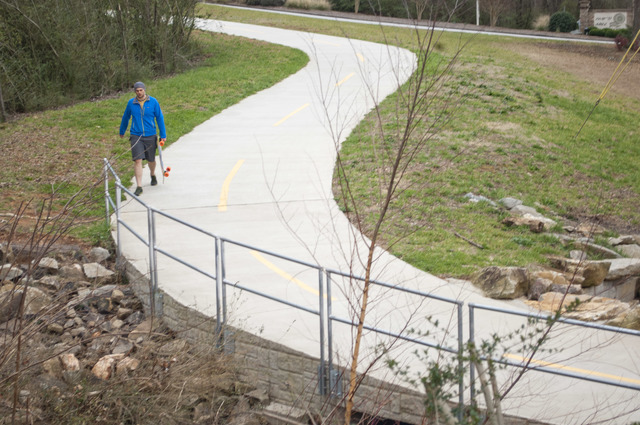 LaGRANGE — Crews are set to begin surveying land near Granger Park next week to prepare to build a 1.5-mile walking and biking trail.

Construction of the trail is expected to begin in late fall and be completed by early summer, according to Leigh Threadgill, city planner.

“I don’t have anything specific yet, because the surveyor work is the beginning — the first step — but from there, our landscape architect will do drawings and we can begin construction,” Threadgill told City Council on Tuesday.

The 12-foot-wide, concrete trail is slated to begin near West Haralson Street and follow north through land between North Greenwood and Gordon streets toward Granger Park. The land is owned by the Callaway Foundation, which is leasing it to the city for 20 years at no charge. Near the baseball fields, the trail is planned to turn west and loop around the retention pond before heading east up Hunnicutt Place toward LaGrange High School and completing the loop.

“That 12-foot width provides the most comfort on the trail,” Threadgill said. “It’s a multimodal trail — so it (can be used by) cyclists, people with strollers, people with dogs, rollerbladers, walkers and runners. We want to make sure people have the area to move around comfortably.”

The total cost of the Granger Park trail will be determined after plans are drawn up, Threadgill said, but the city has already received a $100,000 grant from the Georgia Department of Natural Resources that will go toward the cost. The $100,000 must be spent by the end of 2016, according to the grant’s terms.

Threadgill also said the trail may act as a “model mile” for a larger, citywide trail system that is currently in a planning phase.

“We’re trying to generate some interest and energy in the project with this demonstration piece,” Threadgill said of the Granger Park trail. “We will be having a public meeting on the master trail plan — the big, city-wide plan — in mid-July … that will be an opportunity for the public to come out and hear what’s going on with the larger trail project, share their comments and give some feedback to work with the consultant.”

“I was actually surprised at how many people were on the trail at noon on a Wednesday,” said council member Mark Mitchell, who visited the Greenbelt. “There were nurses that were walking on their lunch break, bikers, all kinds of people.”

“The hope is that this will be the model mile segment,” Threadgill said. “They (the PATH Foundation) do that to get the ball rolling, to get people excited and show them what they’re trying to build. Since we already planned to do this, it made a lot of sense, and it was a good fit.”

Threadgill said the public hearing on the proposed trail system will be publicized in the newspaper and the final date, location and time will be announced once finalized.

Leigh Threadgill, right, city planner, speaks to City Council member LeGree McCamey and other council members, not pictured, during a work session at City Hall on Tuesday. Threadgill updated City Council on plans to build a trail at Granger Park.

http://lagrangenews.com/wp-content/uploads/sites/37/2016/06/web1_BikeTrailWEB.jpgLeigh Threadgill, right, city planner, speaks to City Council member LeGree McCamey and other council members, not pictured, during a work session at City Hall on Tuesday. Threadgill updated City Council on plans to build a trail at Granger Park.