Locals roll up sleeves for Orlando 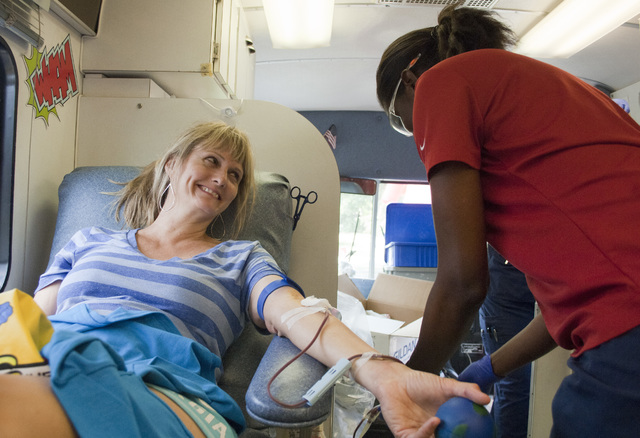 LaGRANGE — As Americans wake up from the nightmare that happened in Orlando, Florida, over the weekend, they are rubbing the sleep out of their eyes and rolling up their sleeves.

Across the country — including here in LaGrange — Americans are donating blood for the victims of the worst mass shooting in American history, which killed 49 people and injured 53 more at a gay nightclub. An alleged supporter of the Islamic State opened fire there just after the bar’s last call. Police shot and killed him, according to the Associated Press.

Sitting in a mobile blood donation center in the parking lot of the LaGrange Memorial Library on Monday, Kara Fields, an elementary school art teacher from LaGrange, lamented the shooting.

“It’s horrible,” she said, seemingly searching for the right words as her blood flowed from a needle in her arm into a pint-sized bag. “It’s just another blow to many innocent people, I think it affects everyone.”

Fields was one of nearly a dozen people who stopped by to donate blood. She came to the library to check out some books, saw a sign calling for emergency blood donations and decided to give hers.

“I was parked on the other side (of the library), and I got some books and saw the sign, and thought, ‘you know, I’ve been meaning to do that, but I’m always busy with work,’” she said.

Over the weekend, OneBlood, a blood bank that serves the Orlando area, contacted Life South Community Blood Bank, which provides blood to six hospitals in east Alabama and west Georgia, and asked for as much blood as the bank could spare.

“OneBlood called us, and we sent some yesterday (Sunday), but we couldn’t send everything they need,” said Sharon Carpenter, Life South’s regional director. “The more donors that we see over the next few days, the more we can send to Orlando.”

In fact, Carpenter said, the local blood bank is already stretched thin. It is on “emergency appeal,” Carpenter said, and needs volunteers to replenish the bank’s reserves.

“We have a need for blood, because we’re short for the summer with car accidents and everything that’s going on,” said Shannon Mitchell, a mobile blood donation team supervisor. “We have a high need for O negative donors, so if anyone is O negative, come our way.”

Mitchell said the turn out for the blood drive at the LaGrange Memorial Library was greater than last time they stopped there.

“The last time we came, we only got five units (of blood),” she said. “We’re already on number nine, so hopefully we might get double what we normally get. We need the donors, even without what happened in Orlando, we still have to supply the hospitals, and right now we don’t have enough.”

Anyone interested in donating blood, or organizing a blood drive, may contact Life South Community Blood Bank at 888-795-2707.

The next local blood drive is slated to be held at Walmart on New Franklin Road from 9 a.m. to 4 p.m. Saturday.

Kara Fields of LaGrange, left, gives blood inside a mobile donation center parked at the LaGrange Memorial Library on Monday as Shannon Mitchell, a mobile team supervisor, checks on her. Fields was one of nearly a dozen people who donated blood at the mobile unit Monday.

http://lagrangenews.com/wp-content/uploads/sites/37/2016/06/web1_GiveBlood02WEB.jpgKara Fields of LaGrange, left, gives blood inside a mobile donation center parked at the LaGrange Memorial Library on Monday as Shannon Mitchell, a mobile team supervisor, checks on her. Fields was one of nearly a dozen people who donated blood at the mobile unit Monday.