It’s time to chase a championship 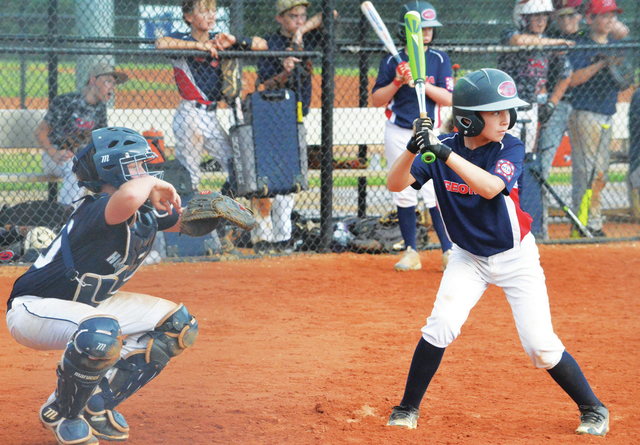 The Troup County 11-12-year-old all-star team, which includes a handful of players who made a run at a World Series title a year ago, will begin play in the Dixie Youth Baseball District 1 tournament this weekend.

The winner of the state tournament then qualifies for the 12-team World Series that will be held in Laurel, Miss.

The team has been hard at work since the Troup County Parks and Recreation Commission regular season ended more than two weeks ago, and it’s an experienced group.

Nearly every team member has been a part of an all-star team before, and six of them helped lead a 9-10-year-old team to a state championship a year ago before placing third in the World Series.

“Everyone of them has (been an all-star) except for one,” Troup head coach Ben Jackson said Tuesday night after a scrimmage game at the Harris Baseball Complex. “We’ve got one kid that wasn’t here tonight, and this was his first year playing baseball. And he is a good baseball player.”

Among the team members are Colton Esposito, Devon Murphy, Trevor Booton, Jesse Swann, T.J. Wilkerson and Preston Pressley, who were on the 9-10-year-old Troup National team a year ago.

That team went 14-2 in the district and state tournaments and the World Series combined.

Now, those players and their teammates on the 11-12-year-old team will look to enjoy a winning summer.

Jackson said one of the primary messages he and the other coaches has passed along to the players is the importance of staying positive, even when things go wrong, which happens frequently in baseball.

Jackson said he has also made sure the players understand what it means to wear the Troup County uniform and represent the community.

“We talked about that our first practice together,” Jackson said. “All right you guys are representing the town. We talked to them about, when you strike out, when it happens, don’t slam your bat down, because you’re representing an entire community. Don’t do anything to embarrass yourself.”

Jackson doesn’t anticipate there being any issues with that.

He said it has been an exceptional group of players to work with, and he has enjoyed being around them the past two-plus weeks.

“I don’t even have a son playing. I just love it,” Jackson said. “Mine is too old to play. But he’s loving it. He comes out here and practices with them. In fact I get him to pitch to them a lot in practice. We’ve had a good time with it.”

Jackson said being a part of an all-star team requires a major commitment of time, but he said that’s a small price to pay.

“It’s been fun,” he said. “The only thing I don’t like is all the time away from your family. Other than that, it’s been great. It’s fun. It’s well worth it.”

The players haven’t had a great deal of time together.

By the time Troup County plays its first game, the players will have been together less than three weeks, but Jackson said a lack of familiarity is not an issue.

The team certainly looked prepared on Tuesday when it won a game against a local travel team.

“There weren’t but about two kids that didn’t know everybody,” Jackson said. “They’ve all played this game a while. They’re ready.”

Head coach Ben Jackson meets with the players on the Troup County 11-12-year-old all-star team after Tuesday’s scrimmage game. The team will play in the district tournament in Thomaston. Kevin Eckleberry | Daily News

http://lagrangenews.com/wp-content/uploads/sites/37/2016/06/web1_baseball2.jpgHead coach Ben Jackson meets with the players on the Troup County 11-12-year-old all-star team after Tuesday’s scrimmage game. The team will play in the district tournament in Thomaston. Kevin Eckleberry | Daily News