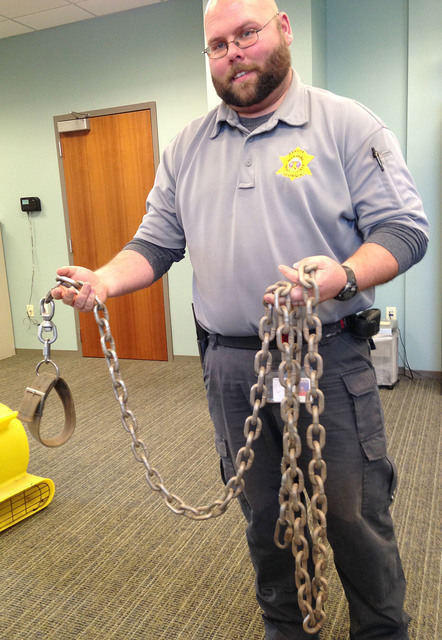 Shaquille D. Heard, 22, and Demarquee Jenkins, 22, both of West Point, were each charged with six counts of aggravated cruelty to animals and 11 counts of dog fighting.

Prosecutor Melissa Himes asked presiding Judge John Simpson to sentence Heard and Jenkins to five years, two of which she recommended to be served in prison for each of the six counts of aggravated cruelty to animals.

Simpson agreed, and sentenced Heard and Jenkins to a total of 10 years to serve two in a state prison, with the rest of the time to be served on probation. The sentences run concurrent.

Troup County marshals discovered a dog-fighting training area beside a home in the 100 block of Billings Road in January 2015. Marshals also found 10 pit bull mix dogs tied up in the woods and another dog in the back of a home, Chief Marshal Lonza Edmondson told the Daily News in February 2015.

Some of the dogs were found chained up to a gas pipeline, Deputy Marshal Marcus Rakestraw wrote in a report. The animals were chained with heavy-duty lumber chains, including one dog that only weighed about 30 pounds, he wrote.

The two suspects told marshals at the scene they were the dogs’ owners.

The animals also had wounds associated with dog fighting, Edmondson said. They had healed wounds on their front legs and faces, torn ears and the dogs’ teeth were filed to be more sharp. Marshals also located medicine and syringes used to treat the animals’ wounds.

The men are banned from owning or possessing dogs for 10 years and must each pay a $1,000 fine, Himes said. They must also pay restitution in the amount of $149.20 to animal clinics in Troup County and Chambers County, Alabama.

Heard and Jenkins were eligible for first offender treatment, but declined to take advantage it, she added.

If a person is sentenced under Georgia’s First Offender Act and successfully completes the sentence, they will not have a conviction on their record and the charge will be sealed from their official criminal history, according to the advocacy group Georgia Justice Project.