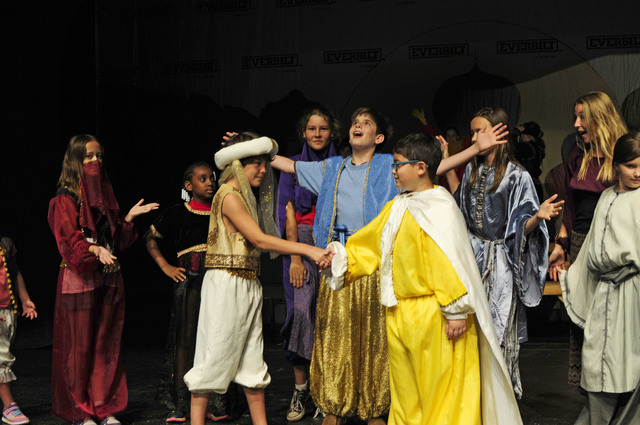 LaGRANGE — The young cast members for “Disney’s Aladdin Jr.” have spent almost two weeks in a crash course for Friday’s performance, and they’re ready to go.

“They’re taking it seriously and that’s good,” said director Valerie Longshore-Sargent. “Kids, they want to have fun, and they’re finding this fun.”

The performance camp, part of the Lafayette Theatre Academy, hasn’t been all fun and games, Longshore-Sargent said. The children have worked solidly each day to prepare for the start of performances Friday. However, they’ve enjoyed the push and expectation, she said.

“We run it just like a regular production every day … we try to give them everything a normal theater would have and talk through the processes of why we do these things,” Longshore-Sargent said.

The musical is based on the animated Disney film version of “Aladdin” about a young thief who falls in love with a princess and finds a magic lamp that can help him fulfill his dreams. The main cast is rounded out by the wise-cracking genie of the lamp and the villainous Jafar, who is intent on marrying the princess and stealing the lamp.

Render McLeod, 11, who will start at Gardner Newman Middle School in the fall, plays the genie

“He’s a really extravagant character, really excited all the time,” McLeod said of the genie, who he based closely on the film version. “Robin Williams (who voiced the genie in the animated movie) is the inspiration for how I act in the play.”

McLeod was also in the academy’s production of “I Never Saw Another Butterfly” and spent half of the last school year as part of the theater academy.

“My grandma always said I should be in movies or the theater,” McLeod said. “I can project my voice, do impressions, impersonations. … (In the academy and camp) I really learned things like how to project my voice better and look at the audience more than the other actors.”

The 11 year old sees a possible “amazing life in theater,” and hoped his involvement would help further his goal.

Walker Kemp, 12, a Gardner Newman Middle School student, plays Aladdin and said he’s enjoyed the rigor of the workload and preparation for the show.

“We get little breaks now and then, but most of the day is working,” he said. “But it’s very fun.”

Charlie Key, 10, a Hollis Hand Elementary student who plays princess Jasmine, agreed. She participated in the performance camp last year and has been involved with the Lafayette Society for Performing Arts in dance for years.

“I enjoy making new friends, I also love to sing and dance,” she said. “… It’s been intense, but fun.”

Longshore-Sargent said the new theater academy, which just finished its first year, grew from several years of performance camps. The purpose of the academy is to engage more youth in the community, a contrast to mostly adult participation at most LSPA stage productions.

The show will feature 28 children from third to eighth grades. They will perform “Disney’s Aladdin Jr.” on Friday, June 17, and Saturday at 7 p.m., with an additional show at 2 p.m. Saturday.

Performances will be at the LaGrange College Price Theatre at 302 Forrest Ave. Tickets are available at www.lsparts.org.

Charlie Key, 10, as princess Jasmine and Walker Kemp, 12, as Aladdin hold up the magic carpet with their puppet doppelgangers Wednesday at Price Theatre.

http://lagrangenews.com/wp-content/uploads/sites/37/2016/06/web1_web0616Aladdin02.jpgCharlie Key, 10, as princess Jasmine and Walker Kemp, 12, as Aladdin hold up the magic carpet with their puppet doppelgangers Wednesday at Price Theatre.

The cast of ‘Disney’s Aladdin Jr.’ poses for a photo Wednesday at Price Theatre.

Walker Kemp, 12, as Aladdin shakes hands with the sultan, played by Kenny Horlander, 10, with the genie, played by Render McLeod, behind them during rehearsal Wednesday of a scene from ‘Disney’s Aladdin Jr.’ by students in the Lafayette Theatre Academy’s performance camp. The students will perform the show Friday and Saturday at Price Theatre.

http://lagrangenews.com/wp-content/uploads/sites/37/2016/06/web1_web0616Aladdin01.jpgWalker Kemp, 12, as Aladdin shakes hands with the sultan, played by Kenny Horlander, 10, with the genie, played by Render McLeod, behind them during rehearsal Wednesday of a scene from ‘Disney’s Aladdin Jr.’ by students in the Lafayette Theatre Academy’s performance camp. The students will perform the show Friday and Saturday at Price Theatre.