Man sentenced for shooting into crowd 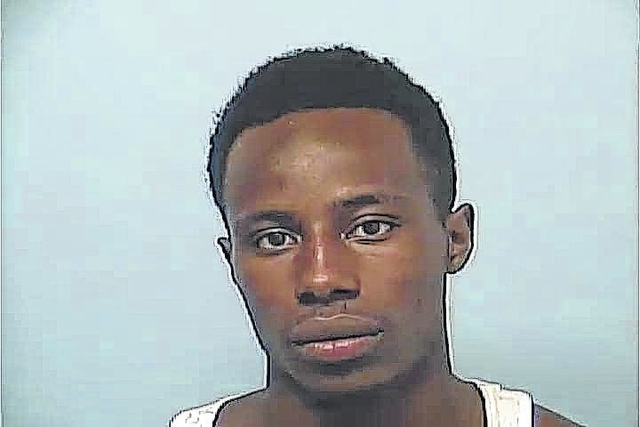 LaGRANGE — A man accused of shooting into a crowd of people on Harwell Avenue after a heated verbal argument pleaded guilty Wednesday afternoon in a Troup County Superior Courtroom.

Quarderius Shavonte Ferrell of LaGrange was charged with two counts of aggravated assault and one count of violating the Street Gang Terrorism and Prevention Act.

He also pleaded guilty in a second, separate case to one count of the sale of marijuana and one count of violating the Street Gang Terrorism and Prevention Act.

Prosecutor Melissa Himes said the state and Ferrell’s defense attorney, Ken Gordon, came up with a negotiated plea deal. Himes recommended 15 year to serve four years in jail for both of the aggravated assault charges and the Street Gang Terrorism and Prevention Act in the first case, all to run concurrent.

Blackmon agreed with the negotiated plea and sentenced Ferrell to a total of 15 years to serve four behind bars. He must also complete anger management classes and have no contact with the victims.

On June 1, 2015, Ferrell was the passenger in a Nissan Maxima that was partially blocking Harwell Avenue. Another car carrying several people approached the vehicle and asked the driver to move the car, Himes told the court.

A heated, verbal argument ensued. The second vehicle squeezed by the Maxima and continued to a home farther down Harwell Avenue, Himes explained.

Later that evening, the group was gathered on the front porch when the Maxima drove by the house and someone fired a gunshot in the air, Himes told the court. The car then passed by the home a second time and Ferrell fired a shot out the window towards the house.

No one was hurt in the incident. LaGrange Police discovered the bullet traveled through the walls of the home and was found in back of the residence, Himes said.

The victims were able to identify Ferrell and the driver through separate photo line ups at the LaGrange Police Department, Himes stated.

“Everyone makes mistakes, but some are more shocking than others,” Judge Blackmon said as he addressed Ferrell. “Firing a gun into a crowded area … I’m surprised we’re not here on a murder charge.”

In the second case, Ferrell sold marijuana to a confidential informant in July 2015, Himes said.

When LaGrange Police executed a search warrant on Ferrell’s home, they found digital scales, a .40 caliber firearm and magazine, plus handwritten pages from Gangster Disciples “Book of Knowledge” in his bedroom, Himes stated. Ferrell is a known member of the gang, she added.

“I just want to say I’m sorry,” Ferrell told the court. “At times I was put in bad situations in things that I knew nothing about … I was outnumbered.

“I just made the wrong decision on how to handle it,” he continued, referring to when he fired the gunshot at the home on Harwell Avenue. “But no one got hurt … I learned my lesson. Everybody deserves a second chance.”

Ferrell’s mother also addressed the court before sentencing and asked Judge Blackmon for mercy on her son.

“… I really feel like if he can get mercy from the court, I don’t think he would ever end up here again,” she said with tears in her eyes. “He is the leader of our family. He’s the first one to go to college … I’m not saying he shouldn’t be punished … but I ask if he could be given a second chance.”

But Blackmon stood firm on his decision.

“Nothing good happens when you involve guns in a situation,” Blackmon told Ferrell. “This (sentence) is not a deterrent … but it’s punishment.”

Ferrell took a quick glance back at his family sitting behind him in the courtroom as he was leaving the courtroom.

“Love you, too,” they said back as he was taken away by sheriff’s deputies to the Troup County Jail.