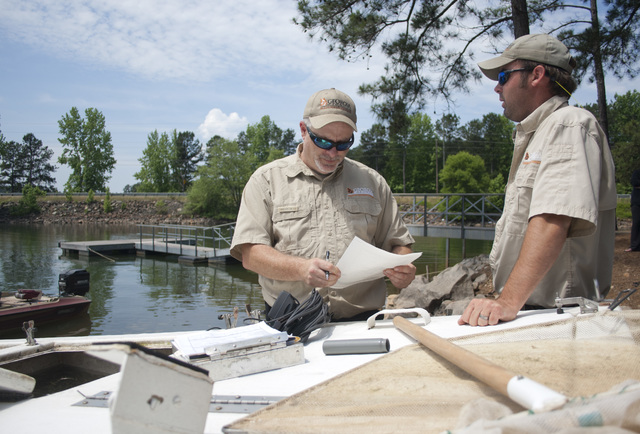 LaGRANGE — The Georgia Department of Natural Resources this week continued an effort to stock West Point Lake with largemouth bass.

An estimated 18,500 largemouth ranging in size from about 2 to 5 inches were deposited into the lake at Earl Cook Recreation Area off Lower Glass Bridge Road on Wednesday.

The stocking is the second occurrence this year, with more than 40,000 largemouth stocked by DNR in the lake in May.

Brent Hess, a LaGrange-based DNR biologist, said the stocking effort is aimed at growing the size and population of largemouth in West Point Lake.

“We work for the anglers, the (fishing) license holders and the people who want to come out and enjoy the lake,” Hess said. “We stock the fish to make it a productive fishery, and what we’re trying to do is increase some of the size of the largemouth bass that are in here.”

Lake Allatoona, near Cartersville, is the only other lake in the state to be stocked by DNR with largemouth bass, Hess said. This will be the final stocking of the year, but Hess hopes to continue the effort over the next few years.

“Allatoona has received some, and they’re doing an eight to 10 year study on stocking largemouth, but that’s the only other lake,” Hess said. “This is fairly unique, and certainly the first in the Piedmont area, and is the cutting edge of what we hope to be able to do throughout the state.”

The fish stocked Wednesday came from a state-run hatchery near Fitzgerald, and were brought here by truck. Like the previous largemouth stocked in May, the fish are dyed and have unique genetic markers that will allow Hess and other biologists to monitor their growth and population in the future.

In the fall, Hess will capture largemouth from West Point Lake and sample them to better understand the fish’s progress, he said.

“We have several methods (of sampling),” he said. “We have electrofishing, where we go out and shock the fish. We do that once a year. We also have gill nets that we also use to get some of the fish that are out in the middle in deeper waters. We do that in the fall, and it kind of gives us a little pulse of what’s going on with the fish population.”

Once the fish are captured, biologists measure their length and weight, and clip a small piece of their fins. The clipping is placed in an alcohol-filled vial and sent to a lab for genetic testing.

“It’s a lot like going to the doctor, when they take your height and weight,” Hess said. “That way, if we see a lot of fish that are too big or too small, then I can start looking into what might be causing that.”

“If I had a choice, I’d have the water up,” he said. “But this will work fine and I don’t expect it to be a big difference, and we’ll go with what we got.”

Hess also said the increased number of largemouth — which take about 2 to 3 years to reach maturity — can help the local economy by attracting fisherman and tourists to the lake.

The U.S. Army Corps of Engineers estimates that in 2012, two million people visited the lake, spending about $63.9 million annually.

Paul Jones, a fishery technician with the Georgia Department of Natural Resources, aids in the release of about 18,500 largemouth bass into West Point Lake at Earl Cook Recreation Area on Wednesday. This is the second and final DNR largemouth stocking of the year.

http://lagrangenews.com/wp-content/uploads/sites/37/2016/06/web1_FishStock01WEB.jpgPaul Jones, a fishery technician with the Georgia Department of Natural Resources, aids in the release of about 18,500 largemouth bass into West Point Lake at Earl Cook Recreation Area on Wednesday. This is the second and final DNR largemouth stocking of the year.