Who wouldn’t rejoice for her? 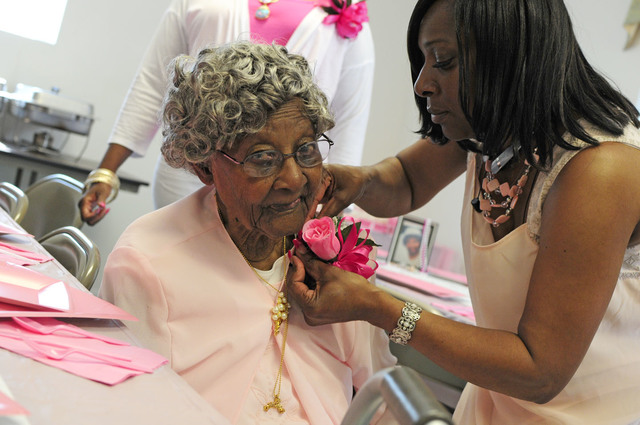 LaGRANGE — Mary E. Maddox celebrated her 100th birthday with a room full of family and friends who honored the Cannonville community native.

Maddox, born June 11, 1916, has 14 grandchildren, 24 great-grandchildren and 12 great-great-grandchildren. She was born during World War I and lived through World War II. She endured oppression of African-Americans until the civil rights movement and voting act amendment, notes a proclamation from the city of LaGrange, which Councilwoman Norma Tucker presented to Maddox on Saturday, June 11.

Tucker was among several people who spoke about the centenarian. Children and grandchildren from all four generations spoke about her Christian love, kindness, hard work ethic and intelligence.

Daughter Ruby Davidson recalled her mother’s upbringing on a farm, working for $3 per week, which she split with her mother. Maddox worked as a housekeeper until she could no longer work.

“She is a very christian person,” Ruby Davidson said. “She knows how to treat everybody nice and kindly. … Now I look at her sitting there in her rocking chair, and she’s still rocking.”

Maddox said she was “real happy” to have the big showing at Thankful Baptist Church, where she is the oldest member, attending since she was a child. The church also is in the Cannonville community where she grew up and has lived most of her life.

The centenarian said she has had a lot of rough times in her life, working the fields of a farm where she grew up. She also faced prejudice in her youth, but noted she now can openly vote and go into the same stores as everyone else, rights denied to her until she was about 50.

However, relatives recollected that she was always kind and loving.

“Not as many grandchildren are as lucky as me to have a grandmom like you, Carolyn Davidson told the group. She called Maddox “a grandmom, a friend and a mentor.”

Granddaughter Tara Davidson pins a corsage to Mary Maddox’s sweater Saturday during a ceremony to honor her 100th birthday. The Cannonville community native celebrated her centennial at Thankful Baptist Church on Cannonville Road, where she is the oldest member.

http://lagrangenews.com/wp-content/uploads/sites/37/2016/06/web1_web0615MaryMaddox.jpgGranddaughter Tara Davidson pins a corsage to Mary Maddox’s sweater Saturday during a ceremony to honor her 100th birthday. The Cannonville community native celebrated her centennial at Thankful Baptist Church on Cannonville Road, where she is the oldest member.