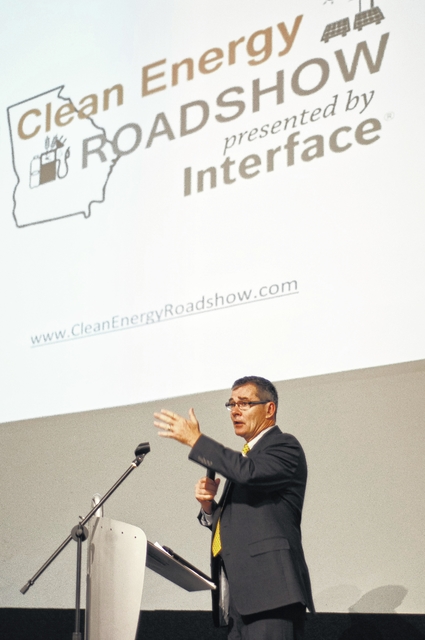 LaGRANGE — A clean energy seminar and expo cruised through LaGrange recently, with leaders from industry and government convening to discuss Georgia’s sustainable future.

The state Public Service Commission presented the Clean Energy Roadshow, hosted by LaGrange-based Interface — the world’s leading manufacturer of carpet tiling and a global leader in sustainability — on Friday at an Interface facility in the Lukken Industrial Park.

The roadshow, in its sixth year, brings together leaders from the private sector — including Georgia Power, Atlanta Gas Light and solar energy companies — with governmental officials — including state elected officials, municipal utility employees and LaGrange Mayor Jim Thornton. LaGrange is the roadshow’s first of eight stops across the state.

Public Service Commissioner Tim Echols moderated the event, and lauded Interface and local officials for their work on the Ray C. Anderson Highway. Dubbed “The Ray” after Interface’s founder, a 16-mile stretch of Interstate 85 between West Point’s exit 2 and LaGrange’s exit 18, officials hope to make the road the most sustainable and environmentally friendly in the nation.

“I think that the designation as the Ray C. Anderson Highway, the efforts being proposed, and implemented, can be an enormous economic development tool for Troup County in attracting more businesses that have sustainability as a mindset,” Echols said. “It’s drawing attention to the importance of it, and it’s creating an image for this area, and companies like to be in an area that reflects their corporate values.”

Harriet Langford, Ray C. Anderson Foundation president and Anderson’s daughter, addressed the roadshow’s attendees for an update on “The Ray.”

“’The Ray’ will be a global proving ground for the evolving ideas and technologies that will shape the transportation infrastructure of the future, and it starts right here on this 16 miles of West Georgia, on the land and communities surrounding it,” Langford said. “By innovating from the ground up, we’re creating a corridor that reconnects and restores us, paving the way to a safer, more prosperous future for us all.”

The foundation’s goal, simply put, is to make “The Ray” the best stretch of highway in the nation — if not the world. The foundation aims for zero deaths, zero net pollution and zero waste on the 16-mile stretch. Langford and her foundation partners are eyeing creative ways to achieve those lofty goals.

One technology that could be deployed on “The Ray” is so-called “smart road studs,” Langford said. Smart road studs are LED lights embedded in the highway that can help warn drivers of upcoming hazards, such as wildlife in the roadway, weather conditions or impaired drivers.

Still, Langford and the Ray C. Anderson Foundation want to see more on “The Ray.”

“‘The Ray’ will also be bringing new technology to the United States,” Langford said. “A roll-over tire pressure monitoring system will be installed and located at the West Point visitors center for trucks and vehicles. This roll-over tire system will print a report on tire pressure and let drivers know if they have the correct air in their tires, which helps with better fuel efficiency.”

Still, the project doesn’t stop there. As transportation officials look toward resurfacing I-85, the Ray C. Anderson Foundation is urging the use of recycled scrap tires, roof shingles and other repurposed materials for creating asphalt. Langford told roadshow attendees the foundation is also looking at the use of so called “carbon concrete” for the resurfacing.

“This technology will capture (carbon dioxide) emissions from dirty coal-powered plants and turn it into a rock aggregate and cement. Now, how restorative is that?” she said.

Even nearby Troup High School, which borders I-85, could benefit from the project. Langford said advocates of “The Ray” want to bring “solar noise barrier walls that could power the high school stadium lights and can help mitigate traffic noise from the highway.”

It’s a big project, but there are some big names behind it. On Thursday, the Georgia Department of Transportation passed a resolution endorsing “The Ray,” and Kia Motors Manufacturing Georgia was instrumental in bringing the solar-powered car charger to the welcome center.

“‘The Ray’ is our chance to show the world what is possible – our chance to demonstrate my father’s philosophy of ‘doing well by doing good,’” Langford said. “We believe it’s possible to reimagine our highway system so that it is safer and more sustainable, and that in doing so, we will create economic development opportunities for our community.”

Public Service Commissioner Tim Echols speaks to a crowd at the annual Clean Energy Roadshow on Friday at the Interface facility in the Lukken Industrial Park.

http://lagrangenews.com/wp-content/uploads/sites/37/2016/06/web1_CleanEnergyCMYK.jpgPublic Service Commissioner Tim Echols speaks to a crowd at the annual Clean Energy Roadshow on Friday at the Interface facility in the Lukken Industrial Park.