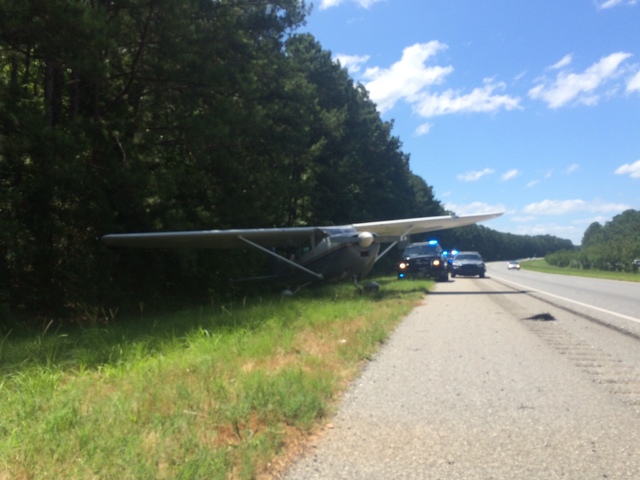 By Melanie Ruberti and Tyler H. Jones Daily News staff HAMILTON — The Federal Aviation Administration is investigating a pilot’s emergency landing Monday on Interstate 185 near exit 25. The single-engine plane landed in the interstate’s northbound lanes at about 10:20 a.m. after apparently running out of fuel, according to Georgia State Patrol Sgt. Maurice Raines, commander of GSP’s LaGrange post. No one was injured, according to a Harris County sheriff’s deputy on scene. The pilot was the only person on board and declined to be interviewed. He departed the Pine Mountain airport earlier in the day, Raines said. A crew refueled the plane on the side of the interstate. Law enforcement officers temporarily blocked traffic to allow the pilot to taxi and take off from the northbound lanes. The plane was airborne by about 12:25 p.m. Raines said the pilot may face charges, depending on the FAA’s investigation. “We’re looking into what the FAA will say, because he really messed up traffic flow,” Raines said. Kathreen Bergens, an FAA spokeswoman, said the investigators will review the incident and aircraft’s records. “The FAA will interview the pilot why it was necessary to land on I-185,” she said in a written statement. “The FAA also may review aircraft operations and maintenance records and may inspect the aircraft to determine if any mechanical problems resulted in the off-airport landing. If the FAA determines that any Federal Aviation Regulations were violated, then the agency can take enforcement action against the person or company responsible.” The FAA does not release names of pilots, Bergens added. It was unclear how long the FAA’s investigation will take. According to the plane’s registration on the FAA’s website, it is a Cessna 182F registered to an owner in Jackson, Georgia.

A small plane sits partially on Interstate 185 northbound near Hamilton after it made an emergency landing Monday morning. Tyler H. Jones | Daily News