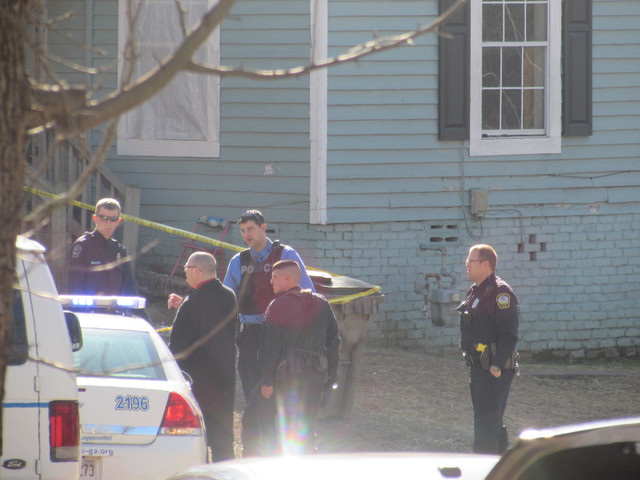 LaGRANGE — Two members of the Gangster Disciples street gang pleaded guilty Monday afternoon in Troup County Superior Court for beating and shooting a man they believed was stealing drugs from their gang.

Ted Demario Green, 27, and Jeffery Jerome Kennedy, 28, both of LaGrange, were accused of savagely beating and shooting Marcel Cotton at a home in the 100 block of McGee Street on Feb. 13, 2015.

Both men were set to go to trial Monday on multiple charges, but pleaded guilty before a jury was picked by the prosecution and defense attorneys.

Coweta Judicial Circuit Assistant District Attorney Herb Cranford recommended to presiding Judge Emory Palmer a sentence of 25 years to serve 15 in jail for Green on all three charges against him. The prosecutor asked for a total of 40 years to serve 20 years behind bars for Kennedy, since the man also pleaded guilty to the assault on Cotton.

Cranford told the court on Feb. 13, 2015, Green lured Cotton to a home on McGee Street and accused him of stealing drugs from him and the Gangster Disciples. Green punched the victim, then Kennedy and four others jumped in and started beating him.

Cotton managed to drag himself to the doorway of the home where he was shot six times in the lower extremities, Cranford said. LaGrange police investigators proved the gun was fired 13 times at Cotton, with six bullets hitting him.

Cotton was airlifted to Grady hospital in Atlanta and survived the incident, but was never able to identify the shooter, Cranford said.

The shooting left Cotton with major nerve damage and he remains in constant pain, Cranford told the court. He submitted pictures of Cotton’s gunshot wounds and his medical records that showed the bullets fractured his tibia, toe and pelvis, plus punctured his thigh and hip.

Cranford also presented the documents taken from Kennedy’s home during a search warrant. The paperwork listed Green, also known as “Zoom,” as the second seat in the Gangster Disciples, and Kennedy, aka “Boss Max,” as the chief enforcement officer.

“The documents show the level of organization within the gang,” Cranford stated. “… It shows an agenda. They (Gangster Disciples) have meetings. They have to pay dues … this is not a loose group. It is an organized group within our community committing acts of violence … not just drug distribution, but acts of violence against anyone they feel has wronged them.

“These crimes were committed for the furtherance of the gang and because of drugs,” Cranford continued. “LaGrange has a gang problem. … The community deserves to know that any act of violence, gang related or not, will be punished.”

“Primarily, all the witnesses the state would have called against my client have pending charges or are convicted felons,” said Green’s attorney, Stacey Jackson. “… All this stuff about leadership and membership, … look at where the information is coming from because they’re actually being charged with something themselves. So take that information with a grain of salt.”

Kennedy and Green have both been convicted before in Troup County Superior Court on various charges, ranging from possession of cocaine to entering auto.

Cotton is also a convicted felon with a known history of drug problems, Cranford said. He was also the victim of another shooting in January 2009 inside a Super 8 Motel room where another man died. But despite his past issues, Cotton reportedly told Cranford he still wanted this case prosecuted as he is now a victim of a senseless crime.

District Attorney Pete Skandalakis said while he wished the defendants had received the state’s full recommended sentence, overall he was pleased with the case from start to finish.

“These are difficult crimes to investigate and prosecute because you often have witnesses who refuse to cooperate and witnesses who are scared to cooperate,” he wrote via email. “We were able to get two violent gang members off the streets and out of our communities for a while. And when they are released from prison, we will have the ability to keep them under strict supervision. … We remain committed to confronting these gang issues and will continue to aggressively prosecute these cases when supported by the facts.”

The other four co-defendants in the case — Cordarius Marquez Collier, Dexter LaShawn Culpepper, Marquavis Adunise Parks and Antonio Jamal Hardnett — already pleaded guilty to their part in the crime and were sentenced.

LaGrange police on Feb. 13, 2015, surround a home in the 100 block of McGee Street where Marcel Cotton was beaten and shot six times, but survived. Two of the suspects in the case pleaded guilty Monday.

http://lagrangenews.com/wp-content/uploads/sites/37/2016/06/web1_McGee-St-Shooting-2-1.jpgLaGrange police on Feb. 13, 2015, surround a home in the 100 block of McGee Street where Marcel Cotton was beaten and shot six times, but survived. Two of the suspects in the case pleaded guilty Monday.