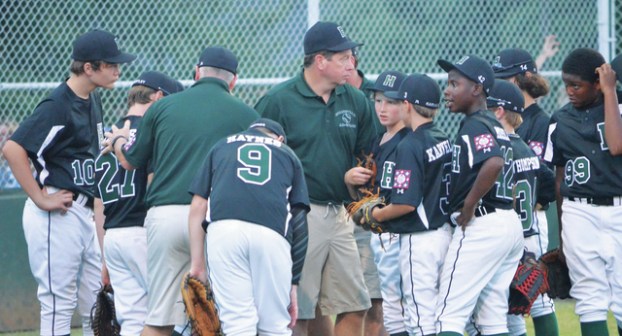 The Hogansville all-stars had one primary goal when they began play in the Dixie Youth Baseball 11-12-year-old District 1 tournament in Thomaston, and that was to finish second or higher and earn an invitation to the state tournament in July.

With Monday’s 4-2 win over Manchester, Hogansville has made that a reality.

Hogansville improved to 2-0 in the tournament, and it will play either Troup National or Manchester on Wednesday.

Whatever happens the rest of the way, Hogansville knows it will be going to the state tournament where it will be competing for a berth in the Dixie Youth Baseball World Series in August.

Hogansville head coach Scott Thompson said the team didn’t have the same energy it had in Saturday’s dramatic 5-4 win over Troup National, but it did enough to win the game, which was all that mattered.

“We came out flat,” Thompson said. “We weren’t the same team as we were Saturday night. But in the end, we’re still going to state. We’re the first team to clinch a berth to go to state. That’s our goal is to win state, so we knew we had to win district or at least come in top two. So we were happy that we were able to come away with the victory.”

Trey Hartley and Jacob Karvelas each got it done on the pitcher’s mound in Monday’s game.

Hartley started and threw the first three innings, and Karvelas finished things off on the mound.

Karvelas only allowed one hit in his three shutout innings.

“He was absolutely lights out,” Thompson said of Karvelas.

One of the biggest plays of the game came in the third inning when Hartley was on the mound.

Manchester had the bases loaded with one out and it was on the verge of a big inning, but Hogansville turned a double play to end the threat.

At the plate, Hogansville came through with some big hits.

Nate Lee and Jacob Karvelas each drove in runs with doubles, and Brett Haynes, who had the game-winning hit in Saturday’s game, added an RBI single.

LAGRANGE – He loved the way they were competing. The LaGrange College youth basketball camp wrapped up on Thursday, and... read more