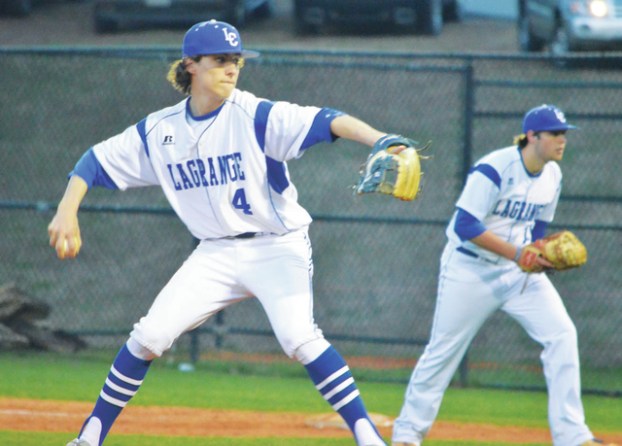 LAGRANGE – They kept their poise.

It was a rough start for the Hogansville all-stars on Saturday in the opening game of the Dixie Youth Baseball 9-10-year-old District 1 tournament at the Harris Baseball Complex.

In the bottom of the first inning, Troup National had already scored two runs, and it was threatening to break the game open with the bases loaded and just one out.

There was no panic for Hogansville, though.

Pitcher David Karvelas managed to get out of the inning without any more runs scoring, and the second inning began with Hogansville down just 2-0.

Hogansville plated four runs in the top of the second inning to take the lead, and it didn’t look back on the way to a 10-3 victory.

That was the first of two games on Saturday for Hogansville and Troup National.

In the second game, Hogansville lost to Thomaston 6-3, and Troup National fell to Manchester 5-0 in an elimination game.

Hogansville will play Manchester at 6 p.m. today with a berth in the championship round on the line, while Troup National’s tournament stay is over.

In Saturday’s first game, Hogansville coach Charles Sanders was proud of the way his team overcome the rocky start.

“We got started kind of slow the first game,” Sanders said. “But they stayed poised, and came around. Our pitching picked up. We got good pitching out of Nathan Karvelas and Logan Sinkfield. And then the bats woke up a little bit, and we started bringing people in.”

Troup National had the early momentum.

In the top of the first inning, Hogansville got a runner to third base, but Troup pitcher Cooper Stephens got out of the jam with no runs scoring.

Jimmie Jackson led off with a single, and Jackson Bozeman followed with a double.

With one out, Stephens delivered an RBI single, and after Brody Thompson walked, Blake Sheppard’s base hit pushed the lead to 2-0.

Karvelas got a fielder’s choice and a strikeout to end the inning and the threat, and Hogansville’s deficit was two runs.

Hogansville took the lead with four runs in the top of the second inning.

The hitters showed patience at the plate by coaxing four walks, and there were also two hit batters in the inning.

Bryceton Sanders was hit by a pitch leading off, and he later scored on a wild pitch to give Hogansville its first run.

Following consecutive walks to LaQuan Dewberry, Davion Johnson and Matt Karvelas, Collin Daniel was hit by a pitch, and that brought the tying run home.

Chris Colton followed with an RBI single, and after Octavious Colton walked, David Kavelas pushed the lead to 4-2 with a base hit.

It remained a 4-2 game until the top of the fifth when Hogansville took control with six runs.

With one out, Octavious Colton walked and David Karvelas singled, and Korey Jackson followed with an RBI single, and it was a 5-2 game.

Karvelas scampered home on a wild pitch to make it a 6-2 game, and Sinkfield then plated two more runs with a double.

After a pitching change, Lex Dukes kept it going with an RBI single, and he eventually scored on a wild pitch, and the lead was 9-2.

Dewberry walked with two outs, and he scored the inning’s sixth and final run on a wild pitch, and Hogansville was on top 10-2.

Troup tried to rally in the top of the sixth.

Jackson Burns singled, and he came home on a two-out hit by Steven Hill.

Stephens kept the game alive with a single, but Sinkfield got a strikeout to end the inning, and the game.

David Karvelas and Sinkfield each pitched three innings for Hogansville.

After a short break, both teams were back on the field for another game.

Troup National, needing a win to avoid elimination, was unable to get anything going at the plate against Manchester.

Manchester scored three runs in the first inning, and it went on to claim the 5-0 win.

Hogansville, meanwhile, had a bunch of scoring chances in its game against Thomaston, but it only managed three runs in the 6-3 loss.

In the top of the first, David Karvelas walked and scored on an error, giving Hogansville a 1-0 lead, but Thomaston answered with four runs in the bottom of the inning.

Hogansville’s Matt Karvelas had an RBI groundout in the second inning, trimming Thomaston’s lead to 4-2.

After falling behind 6-2, Hogansville scored a single run in the sixth and final inning.

Daniel walked and scored the game’s final run on a wild pitch.

The Hogansville players and coaches celebrate after getting out of an inning during Saturday’s game against Troup National. Kevin Eckleberry | Daily News

http://lagrangenews.com/wp-content/uploads/sites/37/2016/06/web1_baseball29.jpgThe Hogansville players and coaches celebrate after getting out of an inning during Saturday’s game against Troup National. Kevin Eckleberry | Daily News

LAGRANGE – He loved the way they were competing. The LaGrange College youth basketball camp wrapped up on Thursday, and... read more