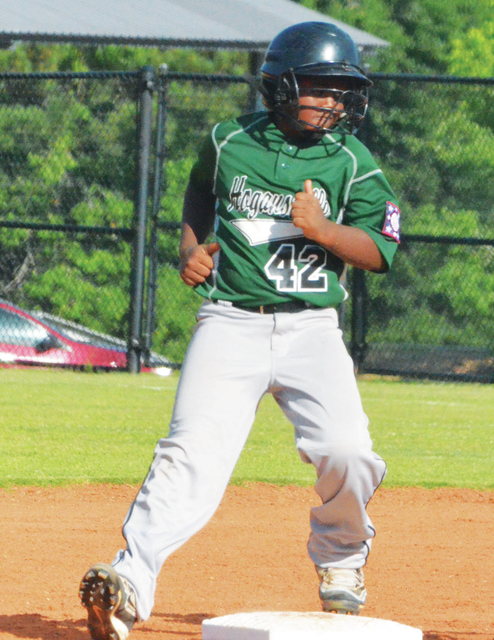 LAGRANGE – It wasn’t their day.

Facing Manchester on Monday in an elimination game in the Dixie Youth Baseball 9-10-year-old District 1 tournament, the Hogansville all-stars were looking for a victory that would propel them into the championship game against Thomaston.

Manchester, which has enjoyed an impressive tournament stay, broke a 1-1 tie with a run in the top of the third inning, and it went on to claim a 6-2 victory at the Harris Baseball Complex.

Manchester and Thomaston, the final two teams standing in the four-team tournament, will play at 6 p.m. today, and both of them have secured spots in the upcoming state tournament.

Hogansville, which splits its games with Troup National and Thomaston on Saturday, finished with a 1-2 tournament record, and its season has come to a close.

Manchester, which opened with a close loss to Thomaston on Saturday before topping Troup National in an elimination game later in the day, was sharp on Monday.

Manchester played well defensively, and it came through with some clutch hits to make the most of its scoring chances.

Hogansville also played a solid all-around game and got nice pitching performances from Logan Sinkfield and David Karvelas, but it wasn’t quite enough.

Trailing 1-0, Hogansville tied it with a run in the bottom of the second inning, but Manchester reclaimed the lead, this time for good, in the top of the third.

Manchester added three insurance runs in the fourth inning to go up 5-1, and it led by at least three runs the rest of the way.

After a scoreless first inning, Manchester broke through for the game’s first run in the top of the second on an RBI single by Eli Phillips.

Hogansville tied it in the bottom of the second.

Lex Dukes led off with a double, and he came in to score thanks to some aggressive base running.

LaQuan Dewberry flied out, and Dukes tagged up and raced toward third base, and when the throw got away, he came home with the tying run.

Manchester plated a single run in the top of the third, with Brody Howard leading off with a walk and later scoring on a wild pitch.

In a three-run fourth inning for Manchester, Javidius Bunkley had a two-run single, and Phillips knocked in a run with a groundout.

Trailing 5-1, Hogansville got one run back in the bottom of the fourth without getting a hit.

Karvelas was hit by a pitch leading off the inning, and he later scored on a wild pitch, trimming Manchester’s lead to 5-2.

Manchester added an insurance run in the top of the sixth, and Callaway came to bat in the bottom of the inning needing at least four runs to keep the game alive.

After the first two batters were retired, Madison Kemp and Chris Colton both walked, and Hogansville was one base runner away from bringing the tying run to the plate.

Manchester was able to get the final out, though, to end Callaway’s tournament hopes.

OF NOTE: For more photos from Monday’s game, check out facebook.com/LDNsports