Plenty of suspense in tourney opener 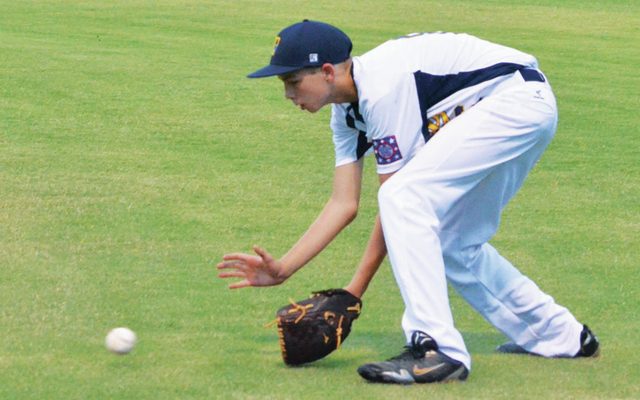 THOMASTON – Down to their final out and trailing by a run, the Hogansville all-stars came through with some late-game magic.

Facing Troup National in an opening-round game in the 11-12-year-old Dixie Youth Baseball District 1 tournament on Saturday night in Thomaston, Hogansville was down 4-2 in the bottom of the sixth inning.

Zack Thompson and Nate Lee came through with back-to-back RBI singles to deadlock the score at 4-4, and the game went to extra innings.

After relief pitcher Trey Hartley set Troup National down in the top of the seventh, Hogansville won it in the bottom of the inning, with Brett Haynes delivering an RBI hit to propel his team to a 5-4 victory.

It was a thrilling win for Hogansville, which will take on Manchester in a winner’s bracket game today at 7 p.m. in Thomaston.

Troup National will play again on Tuesday at 7 p.m. against the loser of today’s game.

“It was a great win, and I expect that we will see these guys again,” Hogansville coach Scott Thompson said after his team’s dramatic comeback. “They’re a great team, a great coaching staff, a great group of kids, and great fans.”

It was an evenly-matched game, but it was Hogansville able to come through with the big plays at the end to pull off the win.

“It was two good teams,” Thompson said. “We expected that kind of game. They pitched well, and we matched them pitch for pitch. And our guys just came up with the big hits.”

For Troup National, it was a difficult loss to take.

The team was one out away from a hard-fought win, and now it will have to regroup and win Tuesday’s game to keep its tournament hopes alive.

“Hogansville didn’t give up. And our guys didn’t either,” Troup coach Ben Jackson said. “They fought the entire game. It could have gone either way.”

Troup National surged to a 4-2 lead on an RBI single by Jesse Swann in the top of the sixth, and Hogansville came to bat in the bottom of the inning needing a pair of runs to avoid the loss.

Chase Williams, who reached on a one-out walk, was on base when Zack Thompson came to the plate with two outs, and he delivered an RBI single to cut the deficit to one.

Next to the plate was Lee, and he ripped a two-strike pitch into left field to bring in Thompson with the tying run.

Lee was left stranded on base, and it was on to extra innings.

Hartley walked a couple of batters in the top of the seventh, but he struck out the side, and he closed the inning with back-to-back strikeouts with two men on base.

With one out, Daniel Martin, who hit a solo home run earlier in the game, reached on a double, and the winning run was in scoring position.

The left-handed Haynes hammered the ball into the outfield, and as Martin crossed the plate with the winning run, the celebration was on.

“Our defense was a little shaky tonight. I contribute part of that to jitters,” Thompson said. “But all in all, I thought we did the things we needed to to win the ballgame. We put ourselves in a position to win, and we never gave up. We always believed that we could come back. And that’s a mentality that will carry you a long way.”

While the clutch hits in the final two innings were big, Hogansville was in a position to win thanks in large part to some exceptional pitching.

Williams started for Hogansville, and he was superb, throwing six innings, and he only allowed one run over his final five innings on the mound.

Hartley then did the job with a scoreless top of the seventh, and he got the win.

Hogansville had to fight back right from the start, with Troup National pushing three runs across in the top of the first inning to build the 3-0 lead.

When a hard-hit ground ball off the bat of Kevin Neighbors was misplayed, Troup National scored another run, and it was a 3-0 game.

Hogansville got one of those runs back in the bottom of the first.

Williams led off with an infield single and came around to score on a Ben Alford double, and it was a 3-1 game.

Hogansville got within a run in the bottom of the second when Martin led off with a line-drive shot over the left-field fence for the solo home run.

It remained a 3-2 game until the sixth inning.

Booton got Troup National started in the top of the inning with a base hit, and he came in to score on Swann’s RBI single.

Hogansville finished with 11 hits, and Thompson was pleased to see so many players throughout the lineup contribute.

“We put the bat on the ball, and we had some guys come up big,” Thompson said. “I really thought we hit well from top to bottom, and that’s what you expect you have to do against a good team.”

For Troup National, while it was a heart-breaking loss, at least there is still more baseball to be played.

“It’s not fun for them, but it’s a good learning experience,” Jackson said.

Hogansville’s Brett Haynes had the game-winning hit in the bottom of the seventh inning. Kevin Eckleberry | Daily News

http://lagrangenews.com/wp-content/uploads/sites/37/2016/06/web1_dixie1.jpgHogansville’s Brett Haynes had the game-winning hit in the bottom of the seventh inning. Kevin Eckleberry | Daily News