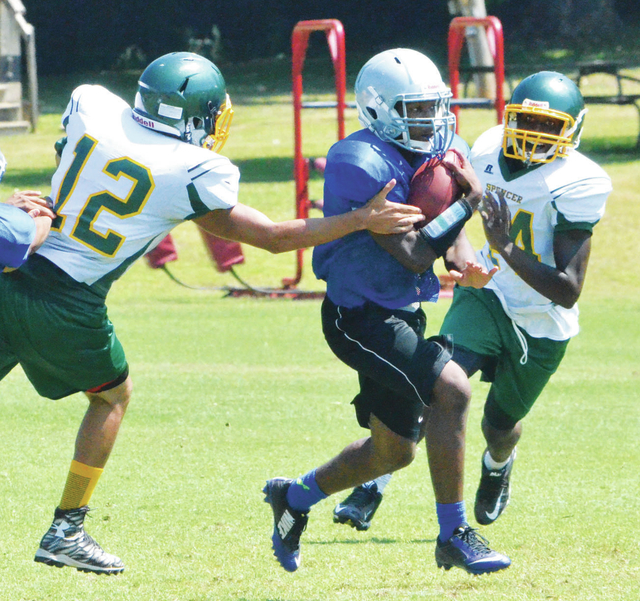 LAGRANGE – They got plenty of work in.

The LaGrange Grangers, along with the football teams from Spencer and River Ridge, spent more than three hours on the LaGrange College practice field on Tuesday for a padded team camp.

It was an 11-on-11, full-contact camp, making it a much closer proximation to a real game than the seven-on-seven format that is so popular during the summer.

LaGrange defensive coordinator Marvin Kendricks is a big proponent of the 11-on-11 format, and he felt he learned a lot about his players on Tuesday.

“This is hands down better than seven-on-seven,” Kendricks said. “After doing this, it makes you not even want to do seven-on-seven any more. Now you get a live picture from all 11. With the seven on seven, the linemen aren’t taking their run reads. With the 11-on-11 padded camp, you have to take your read steps. It makes you play realistic football.”

It was the second straight week LaGrange participated in an 11-on-11 scrimmage.

This week, the scene shifted to LaGrange College, and there were three teams participating.

Considering LaGrange didn’t have a spring practice this year, Kendricks said the scrimmages during the summer are especially critical.

“It’s really good for us, not having a spring, to work out all those kinks early, by giving them a live picture from an opponent, versus your friends in practice,” Kendricks said.

While LaGrange has some major holes to fill on the defensive side of the ball, Kendricks likes what he has to work with, particularly near the line of scrimmage.

Among the players Kendricks expects to make a big impact this year is linebacker James Clark, who was a standout player a year ago.

“I think comparing this year to last year, we’re a little bit better up front,” Kendricks said. “We’re bigger at linebacker, which helps a lot.”

LaGrange will continue its busy summer by hosting a seven-on-seven competition on Thursday.