Police seize dozens of guns in 2016 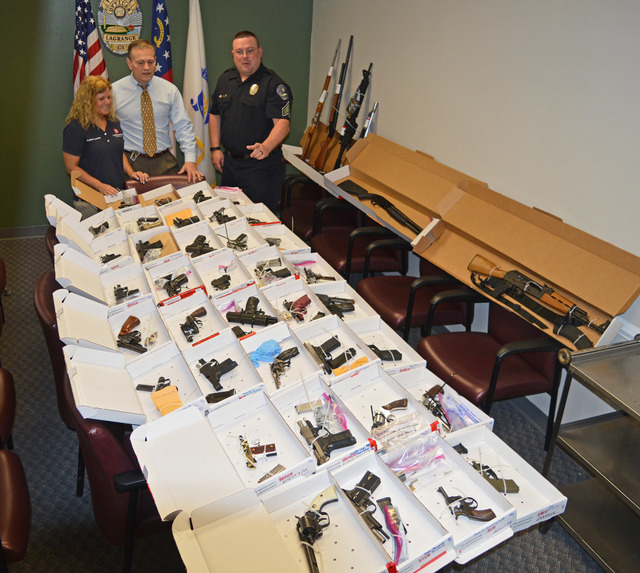 LaGRANGE — From January to May, the LaGrange Police Department has seized close to 60 firearms from the hands of potential criminals whom officers encountered.

The confiscation of weapons has been a departmentwide effort from officers in the patrol division, Crime Suppression Unit, Gang Squad and Special Investigation Unit, he said.

“We’ve taken … guns off individuals who were armed or had a gun in their immediate presence when we encountered them,” Dekmar stated. “Any time you can remove a firearm in criminal conduct, the more you reduce the chances of someone being injured and shot.”

The last violent crime involving firearms in LaGrange happened on June 15 in front of a home on Kings Park Lane. Three men were shot while standing in the yard as a gray Nissan car drove by the residence, said LaGrange police.

While crime can still be an issue in the community, Dekmar said the city’s violent crime statistics are down 14 percent through the end of May.

The statistics and gun confiscation by LaGrange police seem to go hand in hand, and are taking dangerous criminals off the city streets.

“The majority of the people were arrested … and were involved in a drug or gang related investigation … or were in suspicious circumstances during a stop that justified a search and later discovery of a firearm,” said Dekmar. “These encounters are very hazardous to the police because either these people are currently involved in criminal behavior or have been involved in it, so there’s a likelihood of the officer being injured or some sort of armed confrontation.”

The guns seized are maintained as evidence for court cases and stored inside the LaGrange Police Department, said Dekmar. Those that are condemned by the court are disposed of — either destroyed or exchanged through a legal gun dealer to obtain additional or updated firearms for police officers.