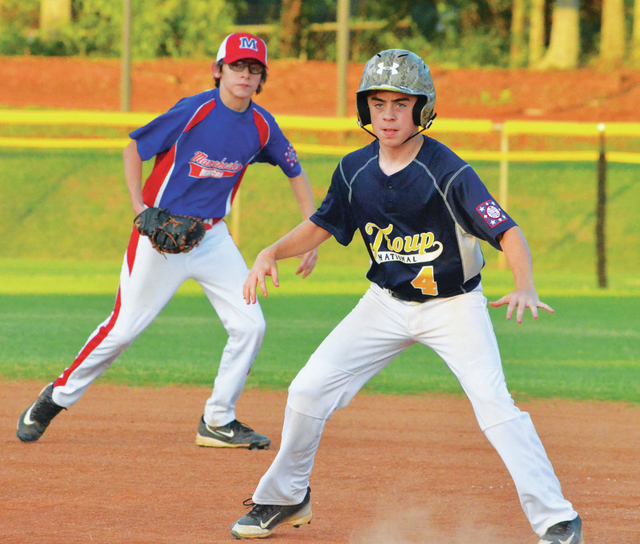 THOMASTON – In a game they had to win to keep their season alive, the Troup National all-stars came up big.

Troup National, after falling to Hogansville 5-4 on Saturday in the first round of the Dixie Youth Baseball 11-12-year-old District 1 tournament in Thomaston, knew it had to beat Manchester on Tuesday if it wanted to keep playing.

Troup made it happen.

With the 5-2 victory, Troup National not only advanced to the championship round to face Hogansville, but it secured an invitation to the state tournament that will be held in July.

Had Troup National lost Tuesday’s game, its season would have been over after just two games.

Manchester grabbed a 1-0 lead in the top of the first, but Troup tied it with a run in the bottom of the inning before taking the lead for good with another run in the third.

Troup added key three insurance runs in the fourth inning to go up 5-1, and Manchester could only muster one run the rest of the way.

Despite the magnitude and importance of the game, Troup National head coach Ben Jackson stressed to the players beforehand the importance of “playing loose, and not being so uptight.”

“Some of the kids knew that if they won tonight they’d get a guaranteed berth to state, and some didn’t,” Jackson said. “Most of them didn’t. We didn’t want them to know. We wanted them to play loose without any pressure. I think that helped. I told them before the game, just go out and have fun. Just enjoy it.”

Four Troup players combined to get the job done on the pitcher’s mound, including Cason Firth, who got the final four outs of the game and struck out the last two batters he faced on called third strikes.

Firth also made a critical defensive play when he threw a base runner out at home plate from his center-field position in the fifth inning.

Mason Wolfe started the fifth inning, and he was relieved by Firth, who got the final out of the inning before throwing a scoreless sixth inning.

At the plate, Murphy had a productive day with two run-scoring hits, including an RBI triple during the three-run fourth inning.

Kevin Neighbors and Esposito added RBI singles in the fourth inning, and Jacob Bearden singled and scored a run in the third inning.

After Manchester surged ahead with a run in the top of the first inning, Troup answered with a run of its own in the bottom of the inning with a two-out rally.

Firth got things started with a walk, and Wolfe reached on an infield single to put two men on.

Murphy then came through with a sharply-hit single to right field to bring in Troup’s first run, and the game was tied 1-1.

Esposito worked around a one-out single in the second inning to hold Manchester scoreless, and Murphy threw a scoreless third inning, although there was a bit of drama.

With two outs, Manchester put two runners on thanks to a hit and an error, but Murphy got the third out on a groundout, and it remained a 1-1 game.

Troup broke the tie in the bottom of the third.

With one out, Bearden reached on a single, and he ended up on third base moments later thanks to some aggressive base running.

Wolfe walked, and when the ball-four pitch got away from the catcher, Bearden hustled all the way to third base, and he scored on a wild pitch to give Troup the lead.

Murphy capped his time on the mound with a perfect top of the fourth, and Troup added three key insurance runs in the bottom of the inning.

Firth began the rally with a walk, and two batters later, Murphy blasted the ball to the right-field fence for an RBI triple, and Troup led 3-1.

Next to the plate was Neighbors, and his RBI single pushed the lead to 4-1, and Esposito had a two-out base hit to bring in the inning’s third and final run.

In the top of the fifth, Manchester had five base runners, but it only managed one run.

With no outs, Grant Brown singled to center field to drive in one run, but another base runner was mowed down at the plate by Firth, who threw a strike from center field.

After a walk and a hit batter, Firth came in to pitch, and he got a groundout to end the inning, and Troup still had a three-run cushion.

In the sixth and final inning, there was no drama.

Manchester got a one-out single, but Firth notched back-to-back strikeouts, both on called third strikes, to end the game.

“Those were low and hard,” Jackson said of the two strikeout pitches. “He put them in a good spot.”

Troup National’s Jacob Bearden gets a lead off first base during Tuesday’s game. Bearden singled and scored a run in the third inning. Kevin Eckleberry | Daily News

http://lagrangenews.com/wp-content/uploads/sites/37/2016/06/web1_baseball12.jpgTroup National’s Jacob Bearden gets a lead off first base during Tuesday’s game. Bearden singled and scored a run in the third inning. Kevin Eckleberry | Daily News

Kevin Neighbors, who had an RBI single in Tuesday’s game, gets a lead off first base. Kevin Eckleberry | Daily News

http://lagrangenews.com/wp-content/uploads/sites/37/2016/06/web1_baseball5.jpgKevin Neighbors, who had an RBI single in Tuesday’s game, gets a lead off first base. Kevin Eckleberry | Daily News