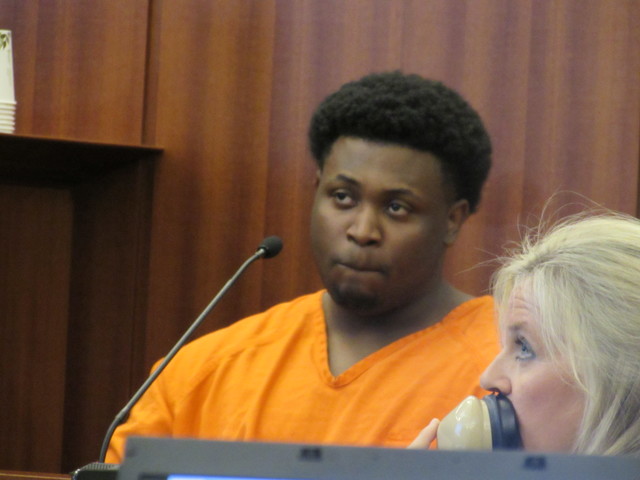 But the day ended in almost 45 minutes of motions and objections by the defendant’s lawyer, Jamie Thiel Roberts, over the expert testimony of a senior detective on the stand.

Harden is charged with two counts of aggravated assault and one count of violating the street gang terrorism and prevention act.

The 26 year old is accused of being one of three people inside a car from which more than 20 shots were fired into a small duplex and a car in the 300 block of Wilkes Street early in the morning of May 1, 2015. One of those bullets pierced the walls of the house and hit T’Quarius Holloway, 21, in the stomach, said LaGrange police.

Holloway was airlifted to an Atlanta hospital and recovered.

He was supposed to testify against Harden on Wednesday, but Assistant District Attorney Jim Powers explained to the jury Holloway died on March 4, 2016. He was shot to death in the first block of Spring Street, allegedly by Demetrius Harden’s cousin, Coby Harden, 26.

The delay in the trial began after Powers called one of the state’s key witnesses, Senior Detective Brian Brown, to the stand.

Brown was the first detective at two crime scenes that night. First, where Harden was stopped by a Troup County sheriff’s deputy while driving a white Honda Accord on Washington Street near Fourth Avenue “within minutes of the call.” He then proceeded to the duplex on Wilkes Street where the victim was shot.

In addition to shards of glass on the ground from where the rear driver’s side window on the Honda was shattered, Brown found a .380-caliber bullet that had not been fired just a few feet away from the car. The detective also found a shell casing and magazine with four .380-caliber bullets just outside the passenger side door. Inside the vehicle, Brown said he could see another .380 bullet laying in the backseat along with a red and black jacket plus a black ski mask laying in the front driver’s seat of the Honda.

Brown said it was a different scene at the Wilkes Street duplex.

Brown said at least 22 shots were fired at the home that morning.

But as the prosecution put up a computer model prepared by Brown showing the inside of the duplex and where Holloway was allegedly seated, Roberts objected and asked that the jury leave the room.

She told presiding Judge Travis Sakrison the computer model by Brown brought up evidence that had not been presented yet to the jury.

Roberts continued that Brown was not considered an “expert witness” in everything he was testifying to, specifically firearm forensics and crime scene analysis and investigation.

“He has no specific training,” she stated. “Anyone can stick a dowel rod into a hole,” she added, referring to the method detectives used to calculate bullet trajectory.

Sakrison agreed and asked Powers to reiterate the detective’s certifications, skills and training.

Roberts continued to raise a series of objections and finally asked for a continuance in the case to have her own expert look at the evidence, especially as it pertained to the bullets found at both crime scenes.

After having Powers demonstrate how Brown would testify to the evidence, Sakrison denied Roberts’ motion and allowed Brown to continue testifying as an expert.

Earlier in the day, LaGrange Police Lt. Dale Strickland told the court he was at the crime scene that May morning and interviewed Harden after he was arrested.

Powers played the entire interview for the jury that was video and audio recorded inside an interrogation room at the LaGrange Police Department. At the beginning of the tape, Strickland was seen leaving the room with Harden still cuffed. The man appeared to yawn, pulled his shirt over his face and doze off until the lieutenant re-entered the room a short time later.

During the interview, Harden admitted to driving a white Honda Accord pulled over by deputies, but denied knowing anything about the incident.

He said there were two other men inside the vehicle as well, but told Strickland he picked them up on the side of the road 10 minutes before being stopped by police. Harden claimed he did not know who the men were and said they jumped out of the car and ran when he was pulled over.

When Strickland told Harden he was being charged with aggravated assault on “T.K.” (T’Quarius Holloway), the 26 year old said he knew nothing about the situation and refused to speak further with the lieutenant without an attorney present.

LPD Detective Jeremy Jones processed the Honda Accord that Harden was driving. Powers showed the jury Jones’ pictures and the detective explained he immediately noticed there was a dent protruding outwards from the door frame.

Once inside the car, the detective said he found a bullet hole in the rear driver’s side door and, once taken apart, he discovered a fired bullet between the metal panels of the door frame.

Jones also discovered a 9mm shell casing lodged between the windshield and hood of the vehicle.

Also in the car was a .380-caliber bullet and a black and red jacket in the back seat, and a black ski mask and T-shirt in the driver’s seat, Jones told the jury.

On cross examination, Roberts questioned why the car was processed three days after the incident and if other people would have access to LPD’s evidence bay, where the examination took place.

“I don’t know when it (the shooting) happened,” Jones told Roberts. “I came into work that Monday and was told there was a car in the bay that needed to be processed … not everyone has access to that area. It remains locked. You have to get the key and sign it out from the evidence custodian.”

The trial will resume Thursday morning with Brown, the senior detective, again taking the stand for the state.

LaGrange Police Senior Detective Brian Brown testifies before a jury on Wednesday in the trial of accused shooter Demetrius Harden about crime scenes he photographed and processed on May 1, 2015.

http://lagrangenews.com/wp-content/uploads/sites/37/2016/06/web1_Trial1.jpgLaGrange Police Senior Detective Brian Brown testifies before a jury on Wednesday in the trial of accused shooter Demetrius Harden about crime scenes he photographed and processed on May 1, 2015.