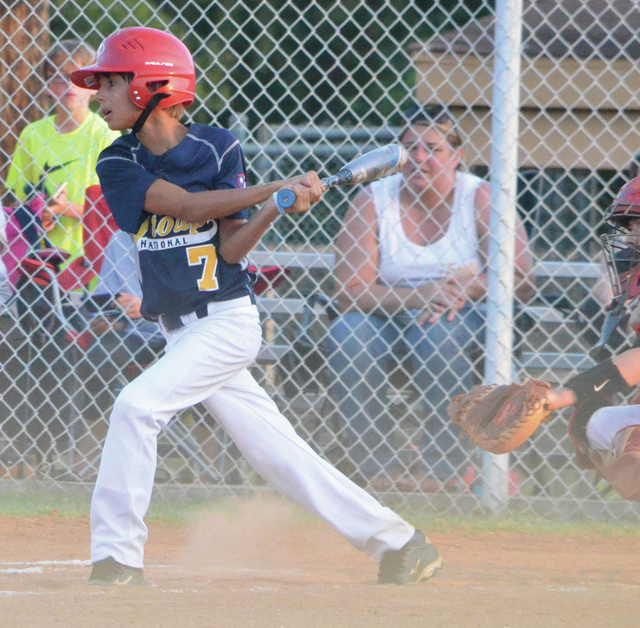 THOMASTON – This time, the Troup National all-stars got to do the celebrating.

On Saturday night in the opening round of the Dixie Youth Baseball 11-12-year-old district tournament, Hogansville rallied from a two-run deficit in the sixth inning to tie it before winning 5-4 in extra innings.

Four days later, Troup National and Hogansville were playing again, and in a repeat of the game from a few days before, there was a dramatic, late-game rally, only it was a different team coming from behind.

Troup National trailed 5-2 as it came to bat in the bottom of the sixth inning, and it was able to put four runs on the scoreboard to claim a thrilling 6-5 win.

Devon Murphy came home with the winning run when Justin Truett reached on an error with two outs in the bottom of the sixth.

Cason Firth had a two-run, inside-the-park-home run in the inning, and Mason Wolfe, Murphy and Kevin Neighbors each had hits to help Troup stage the comeback.

While the odds may have been against Troup heading into the sixth inning, coach Ben Jackson told his players a comeback was possible, and he used what happened on Saturday as proof of that.

Hogansville charged to a 3-0 lead in the top of the first inning, and it remained on top until Wolfe scored the tying run on a wild pitch in the bottom of the sixth.

“It’s two good teams,” Hogansville coach Scott Thompson said. “We wished we could have taken care of business tonight. But we kind of took our foot off the gas after the first inning, and let them back in the game. And they took advantage of it.”

The bottom of the sixth began innocently enough with a flyout, but Jesse Swann reached on a one-out walk to jump-start the rally.

Firth then stepped to the plate and hit Troup’s first home run of the tournament, albeit in an unconventional manner.

Firth, who was 3-for-3 and was a double shy of the cycle, hit a hard grounder over the third-base bag.

As the ball rolled to the fence and the left fielder tried to chase it down, the speedy Firth never slowed down.

Swann crossed home plate with the inning’s first run, and Firth came in right behind him to score easily, and his home run cut Hogansville’s lead to one.

“He’s fun to watch,” Jackson said of Firth. “I love to watch him run in practice. We do a little racing game, and he’s the one that everybody chases. It’s not even a competition.”

Next to the plate was Wolfe, and he legged out an infield single, and the tying run was on base.

Murphy followed with a base hit, and following a pitching change, Neighbors reached on a single to load the bases, and there was still just one out.

When a pitch got away from the catcher, Wolfe raced home with the tying run, and now the winning run was standing on third base.

Jacob Karvelas got a strikeout for the second out, and Hogansville was one out away from getting out of the jam with the score tied.

Next to the plate was Truett, and he hit the ball on the ground, put his head down and took off for first base.

The throw was in time, but the umpire ruled that the first baseman didn’t keep his foot on the bag, so Truett was called safe, and Murphy crossed home plate with the winning run.

The three umpires huddled to discuss the final play, and while the Hogansville players and coaches were hopeful the call would be overturned, it wasn’t, and that was that.

Jackson said the infield single by Wolfe that followed Firth’s home run, and the game-ending play by Truett, were both all about hustle and determination.

Zack Thompson, who pitched 6 1/3 solid innings, was the tough-luck loser for Hogansville.

“I thought Zack pitched phenomenal tonight,” Scott Thompson said. “He pitched into the sixth inning. Really I could have left him in there, but I thought I’d give them a different look. He was very efficient with his pitching.”

Jackson, meanwhile, used five different pitchers, including Truett, who threw a scoreless top of the sixth inning to get the win.

Hogansville, looking to complete a perfect stay in the tournament, got off to a fast start with three runs in the top of the first inning.

Ben Alford kick-started the rally with a one-out walk, and Thompson hit a ground-rule double, with the ball bouncing over the left-field fence.

Nate Lee’s RBI double drove in the first run, and Daniel Martin reached on a fielder’s choice to give Hogansville a 2-0 lead.

Tre Mosley kept it going with an RBI double, and Hogansville was on top 3-0.

Troup National got one of those runs back in the bottom of the first.

Firth tripled, and Murphy had an RBI single, cutting Hogansville’s lead to 3-1.

That’s how it remained until the bottom of the fourth when Troup pushed another run across, and Firth was in the middle of things once again.

Swann doubled, and Firth followed with an RBI base hit to bring Troup within one.

Hogansville then scored two runs in the top of the fifth to seize a three-run lead.

Trey Hartley singled and made it all the way to third on an error before scoring on an infield single by Brett Haynes.

Karvelas then singled to put two men on, and with two outs, Austin Skiff delivered a clutch base hit, giving Hogansville a 5-2 lead.

Murphy, faced with a bases-loaded situation, got a strikeout to end the inning, and Troup National remained within three.

Truett worked around a two-out single to throw a scoreless top of the sixth, and Troup then won it in the bottom of the inning.

Both teams now have 2-1 records in the tournament, and they will meet for a third and final time today at 7 p.m. in Thomaston with the championship on the line.

No matter what happens, both teams have already qualified for the state tournament.

OF NOTE: For more photos from Wednesday’s game, check out facebook.com/LDNsports

Troup National’s Justin Truett is mobbed by his teammates after he was called safe in the bottom of the sixth, allowing the winning run to score. Kevin Eckleberry | Daily News

http://lagrangenews.com/wp-content/uploads/sites/37/2016/06/web1_baseball1.jpgTroup National’s Justin Truett is mobbed by his teammates after he was called safe in the bottom of the sixth, allowing the winning run to score. Kevin Eckleberry | Daily News

Hogansville’s Austin Skiff gets a lead off of first base. Kevin Eckleberry | Daily News

http://lagrangenews.com/wp-content/uploads/sites/37/2016/06/web1_baseball15.jpgHogansville’s Austin Skiff gets a lead off of first base. Kevin Eckleberry | Daily News