A champion is crowned 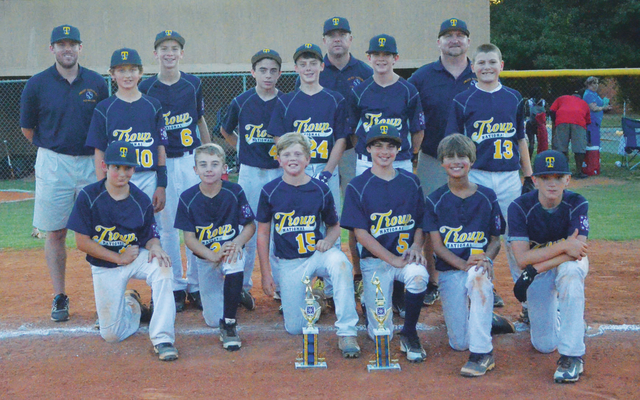 THOMASTON – It doesn’t get any closer than that.

In the 11-12-year-old Dixie Youth Baseball District 1 tournament in Thomaston, the all-star teams from Hogansville and Troup National played three times, and all three games were decided by one run.

Hogansville won Saturday’s game 5-4, and Troup National rallied for a 6-5 victory on Wednesday, setting up Thursday’s showdown for the district championship.

It was another close, hard-fought and well-played game, and it was Hogansville holding on for a 3-2 win to claim the district title.

Hogansville completed the state tournament with a 3-1 record, while Troup National went 2-2.

Both teams have qualified for the Dixie Youth Baseball state tournament that will be held in Macon next month.

In Thursday’s game, Hogansville head coach Scott Thompson handed the ball to Chase Williams, and the right-handed pitcher came through with a sensational complete-game effort, and Daniel Martin provided the top offensive highlight with a solo home run.

Nothing came easily for Hogansville in the tournament.

The team had to fight from behind in three of its games, and it wiped out a two-run deficit in the sixth inning of Saturday’s win over Troup National.

“We were behind in three of the four games, and we found a way to win all three of those games,” Thompson said. “The game we lost, was the game we were up early. I was super proud of the guys. They’ve worked hard for a long time. They’ve had a lot of success in different levels of ball, and I’m happy for them. This was a hard-fought championship. (Troup National is) a phenomenal team.”

Troup National, following Wednesday’s dramatic game where it scored four runs in the final inning to win it, was hoping to complete its tournament stay with a title.

It didn’t happen, but at least the Troup National players have more baseball to play.

“It’s never fun losing, but you learn a lot of lessons,” Troup National coach Ben Jackson said. “It’s how you respond when you lose that’s important.”

While Troup National didn’t win the championship, it did take home the sportsmanship award, and Jackson was pleased with that.

“I told the kids, obviously you want to win the tournament, but they won the sportsmanship award, and that says a lot about the boys, and how they played as a team,” Jackson said. “That means a lot. I was really proud of them for that.”

In Thursday’s game, Williams was terrific for Hogansville.

“Tonight would not have been possible without the effort Chase gave us on the mound,” Thompson said.

Williams limited Troup to four hits, and he was helped out by some stellar defensive plays.

Williams stepped to the mound with 100 percent confidence in the ability of the defense to rise to the ocassion.

“I trusted them, and I threw strikes,” Williams said.

Among the defensive plays was a rally-killing double play in the fourth inning when Hogansville was clinging to a 2-1 lead.

“Every ball that was hit on the ground I think, the plays were made,” Thompson said. “And our guys can play like that. We’ve pitched well several games, but we haven’t played defense behind them, like we can, and we did tonight.”

Devon Murphy started and pitched two innings, Cason Firth threw the next two innings, and Justin Truett worked the bottom of the fifth inning and didn’t allow a base runner.

Troup National was the visiting team, and it took the lead with a run in the top of the first inning.

Trevor Booton led off with a single, and Firth followed with a base hit two batters later to put men on first and third.

Mason Wolfe then drove in a run with a groundout, and Troup was up 1-0.

The lead was short-lived.

In the bottom of the first, Martin stepped to the plate and launched the ball over the left-field fence for his second home run of the tournament.

Martin also had a solo home run in Saturday’s win over Troup.

“Daniel hit that home run, and got us on the board,” Thompson said. “We get down 1-0, and he ties it up, and it’s a new ballgame at that point.”

Hogansville took the lead with another run in the second inning.

Base hits by Jacob Karvelas and Trey Hartley put two base runners on, and Tre Mosley lined a 3-2 pitch up the middle for a single to drive in the go-ahead run.

With men on second and third and one out, Murphy did a nice job of getting out of trouble without any more runs scoring, and Troup trailed 2-1.

That’s the way it remained until the bottom of the fourth.

Martin reached on an error leading off, and he moved to third on a flyout by Karvelas before scoring on a groundout by Nate Lee.

It was an impressive at-bat by Lee, who fought off an 0-2 pitch and put the ball in play to give Hogansville its crucial third run.

That insurance run proved particularly important when Troup scored in the top of the fifth to make it a 3-2 game.

With one out, Wolfe was hit by a pitch, and Murphy followed with a base hit, and Troup had men on first and second.

Ben Ogle then hit the ball on the ground, and as Hogansville attempted to complete a double play, Wolfe scored all the way from second base to give Troup its second run.

Williams buckled down from there and got the next two outs to leave two men stranded, and Hogansville maintained a slim one-run lead.

After Truett retired Hogansville in order in the bottom of the fifth, Troup came to bat in the top of the sixth, needing a run to keep the game alive.

Williams was up to the challenge, though.

With the help of a superb play on a popup by catcher Zack Thompson for out number two, Williams retired all three batters he faced in the sixth inning, and that was that.

Troup National’s Trevor Booton races back to third base while Hogansville catcher Zack Thompson makes a throw. Booton made it back safely. Kevin Eckleberry | Daily News

http://lagrangenews.com/wp-content/uploads/sites/37/2016/06/web1_baseball24.jpgTroup National’s Trevor Booton races back to third base while Hogansville catcher Zack Thompson makes a throw. Booton made it back safely. Kevin Eckleberry | Daily News

Troup National’s T.J. Wilkerson makes a throw in from the outfield after making a nice catch. Kevin Eckleberry | Daily News

http://lagrangenews.com/wp-content/uploads/sites/37/2016/06/web1_baseball18.jpgTroup National’s T.J. Wilkerson makes a throw in from the outfield after making a nice catch. Kevin Eckleberry | Daily News