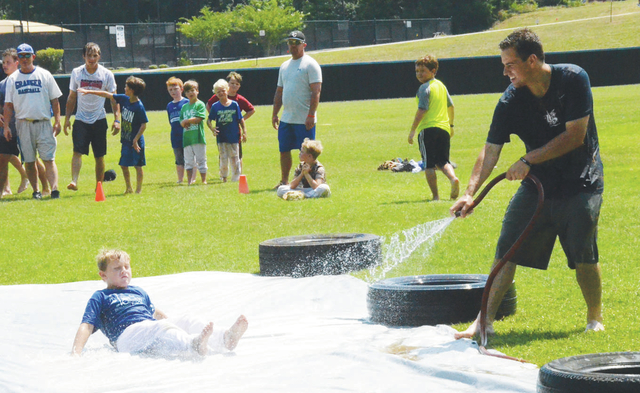 LAGRANGE – It was time to get muddy.

During the LaGrange High youth baseball camp this week, the participants have been working hard, learning all about the fundamentals of the sport from a staff that includes Granger coaches and players.

On Thursday afternoon at the close of the camp session, it was all about having fun, and getting wet.

A tarp was placed on the field that was held down by tires, and after it was watered down, each of the campers took turns sliding on it, and many of them went over the edge onto the muddy grass.

It was a fun way for the campers to close the day, and they’ll be back on the field at Granger Park today for the final day of the camp.

“It’s the first year we’ve done this in a long, long time,” Phelps said. “We had right at 18 kids, and that’s a pretty good number. It was kind of bad timing with the all-stars going on. But it’s definitely something to grow on.”

David Smart, who recently completed his first season as LaGrange’s head coach, wanted to start a camp in part as a way to help foster a connection with the community.

“It’s been real good,” Smart said. “We wish we’d had more, but I think timing has a lot to do with that. Next year we’ll probably do it earlier in the summer. But it’s been real good. The kids have had a great time. And it’s good for our kids to get out here, too.”

A handful of LaGrange players have helped out during the week, and Phelps said they have all been extremely enthusiastic.

“Most of them were dreading getting up early, but once they get here, they’ve had a lot of fun,” Phelps said “And they get to see what it’s like from our end. They’re learning that the best way to learn is to teach. And they’re getting to teach.”

Phelps said the majority of the campers are students who will likely attend LaGrange High one day.

“A lot of these kids are our feeder kids,” Phelps said. “We get to learn their names. We get to see them, and they get to meet us. It’s great.”

One of the young players takes his turn sliding on the tarp at the close of Thursday’s camp session at Granger Park. Kevin Eckleberry | Daily News

http://lagrangenews.com/wp-content/uploads/sites/37/2016/06/web1_camp1-4.jpgOne of the young players takes his turn sliding on the tarp at the close of Thursday’s camp session at Granger Park. Kevin Eckleberry | Daily News

LaGrange High baseball player Champ Willis wets the tarp as one of the campers shows off his sliding skills. Kevin Eckleberry | Daily News

http://lagrangenews.com/wp-content/uploads/sites/37/2016/06/web1_camp2-4.jpgLaGrange High baseball player Champ Willis wets the tarp as one of the campers shows off his sliding skills. Kevin Eckleberry | Daily News