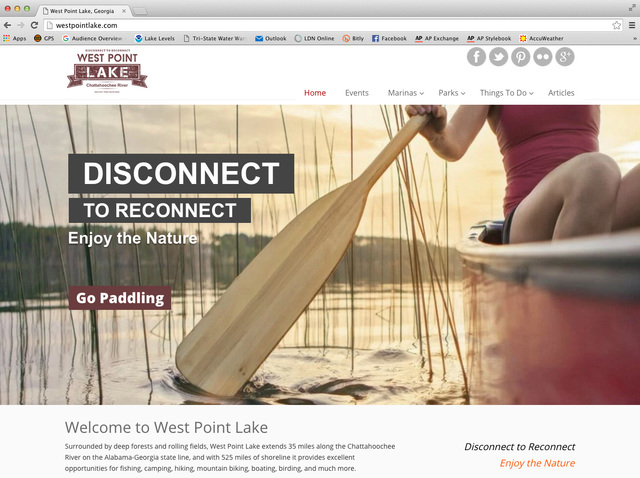 LaGRANGE — Even with water levels at West Point Lake slightly down for this time of year, one local woman isn’t giving up on trying to promote it.

Dorraine Stanley of LaGrange earlier this year launched a comprehensive website, www.westpointlake.com, that promotes the lake, tries to attract tourists and acts as a clearinghouse for information on camping, hiking and lake recreation.

“I’ve lived here since ‘79 and I didn’t know we had camping or hiking, or that there were mountain bike trails out there,” she said of West Point Lake.

Stanley is a court reporter by trade, but when her business slowed down, she sought to find an alternative income and had the idea to build a website to promote the lake and local tourism. She hired a web developer about a year and a half ago, and started collecting information to create the website.

In casual conversations with friends, she found out that some people in LaGrange don’t even know West Point Lake exists, she said.

“I talked to a LaGrange College student that lived here for five years and didn’t know we had a lake,” she said. “I was thinking, ‘She’s hanging around younger people, how can that subject never come up?’”

Stanley said she feels locals aren’t taking advantage of the hours of recreational opportunities at West Point Lake. Aside from the water, she noted, the lake offers countless chances for hiking, camping and wildlife viewing.

Steve Logan, the corps’ project manager for West Point Lake, said he wholeheartedly supports Stanley’s effort to put the lake in the spotlight.

“As far as I know, her motives are good and pure,” he said. “I think she took this on as a project to provide genuine, good information. She thinks a lot of the lake, and we’re all for it.”

Logan said attendance at the lake’s four campsites has been through the roof since the summer recreation season began.

“The lake gets a lot of attention with camping,” he said. “We’ve been full (at the campsites) almost every weekend since Memorial Day. Our camp grounds stay very full.”

“We ask users to keep that in mind, and wear life jackets and be safe,” Logan said. “We want them to be careful, so when they go home, they can come back another day.”

A screenshot from www.westpointlake.com shows the website aimed at promoting the lake and attracting visitors.

http://lagrangenews.com/wp-content/uploads/sites/37/2016/06/web1_LakeWebsite01WEB-1.jpgA screenshot from www.westpointlake.com shows the website aimed at promoting the lake and attracting visitors.