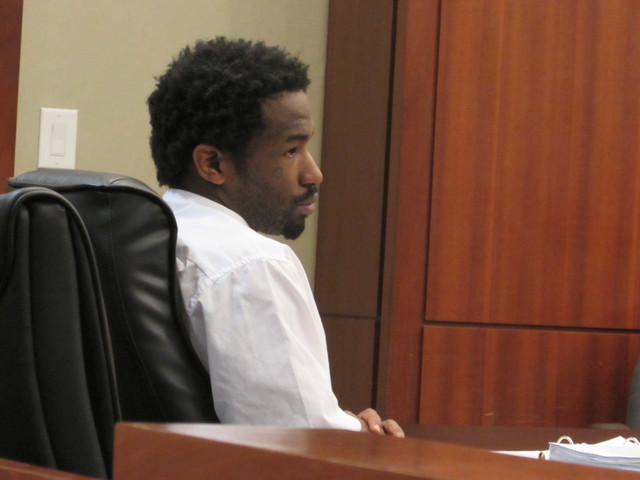 LaGRANGE — It took a Troup County Superior Court jury a little over an hour Thursday evening to find a LaGrange man guilty for his part in a drive-by shooting that injured one man inside a duplex in the 300 block of Wilkes Street.

Demetrius Ladarius Harden, 26, was found guilty on two counts of aggravated assault. The jury said Harden shot or was driving the car for two yet-to-be-identified people who shot at least 24 bullets into the home and a car on May 1, 2015. One of those bullets struck T’Quarius Holloway, 20, in the side while he was inside the residence, Assistant District Attorney Jim Powers said.

Two other people were also inside the home, but neither was hurt during the shooting.

Harden showed no emotion as the verdict was read.

As presiding Judge Travis Sakrison polled the jury, Harden looked back toward his family sitting behind him and started speaking to them. Troup County sheriff’s deputies instructed him to turn around.

Harden grew steadily more upset and began yelling toward the jury box. Deputies tried to again quiet him down, but Harden twisted away from the officers and started to get up from the defendant’s table as if to get away from them.

At least four deputies lunged at Harden and pushed him up against a wall. They handcuffed the defendant then forced him out of the courtroom and into a holding cell until he could calm down.

Some of Harden’s loved ones also became upset and briefly left the courtroom.

Sakrison proceeded with sentencing and after a brief break, Harden returned to the courtroom.

Powers, the prosecutor, told Sakrison the 26 year old was previously convicted for the sale of cocaine. He asked the judge to sentence Harden under his new conviction for the two counts of aggravated assault as a recidivist.

“This is the type of crime that is on the rise in our community,” Powers said. “These type of crimes are hard to try as the court saw … and when we get a conviction in these cases, we need a stiff sentence.

“Harden sits there because he’s committed to a life on the street, he’s committed to that code of conduct as we saw earlier,” Powers said, referring to Harden’s courtroom outburst. “His cousin, Coby Harden, has been indicted for murdering the victim in this case, T’Quarius Holloway. We ask the court to reflect the seriousness of this case.”

Defense attorney, Jamie Thiel Roberts, asked the judge to take into consideration Harden’s medical condition and the probability her client was in the wrong place at the wrong time.

“The evidence showed my client is on disability for hearing voices and short term memory loss,” she explained to the court. “That morning, when he was pulled over by deputies, he didn’t run. He didn’t run because he didn’t have anything to run from. … I think the evidence showed that he was likely just the driver, not the shooter. … He has one conviction and it was not a violent conviction. We just ask for the mercy of the court.”

Powers reminded Sakrison that Harden had been charged with aggravated assault twice before, once when he was 17 years old, but was never convicted.

Sakrison said he was deeply disturbed by the vicious scene at the duplex on Wilkes Street.

“All those bullets holes … I’m not sure you knew who was in those house, but it showed you had no regard for life at all,” he told Harden before sentencing him. “But I am going to take into account that you are still a young man.”

Sakrison sentenced Harden for aggravated assault against Holloway to the maximum as a recidivist: 20 years behind bars. For the aggravated assault charge for the other two people in the home, Harden received 20 years’ probation to run consecutive to count one.

The total sentence is 40 years to serve 20 in prison.

“Take this as an opportunity to turn your life around, Mr. Harden,” Sakrison told him. “If you were the driver and not the shooter as the evidence showed, I consider this a light sentence. So you should really take this opportunity. Good luck to you.”

Harden’s mother sobbed out loud as she watched her son led away from the courtroom to be taken to Troup County Jail.

Demetrius Ladarius Harden, 26, shows no emotion as the guilty verdict is read in Troup County Superior Court by presiding Judge Travis Sakrison. Harden was found guilty on two counts of aggravated assault for a May 1, 2015, drive-by shooting.

http://lagrangenews.com/wp-content/uploads/sites/37/2016/06/web1_Trial2.5-1.jpgDemetrius Ladarius Harden, 26, shows no emotion as the guilty verdict is read in Troup County Superior Court by presiding Judge Travis Sakrison. Harden was found guilty on two counts of aggravated assault for a May 1, 2015, drive-by shooting.