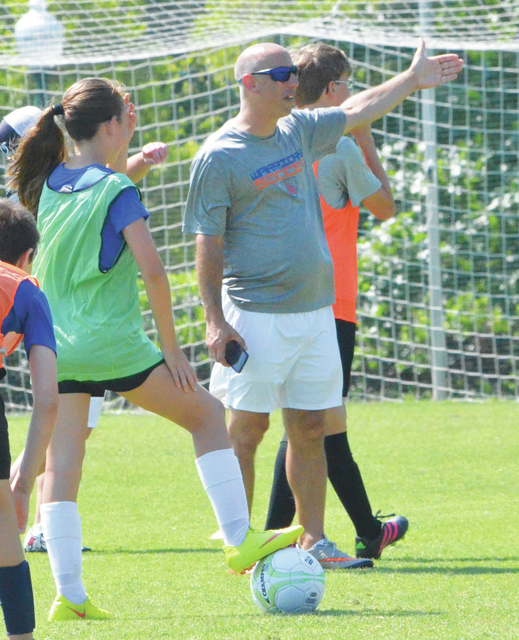 For most of the past 20 years, Mike Petite has been a part of the LaGrange Academy family, and he enjoyed tremendous success as a coach.

When Callaway High came calling, though, Petite felt it was time to make a move.

Petite, who helped out during the Jeff Geeter soccer camp last week, is the new boys’ soccer coach at Callaway High.

Petite is taking over for Jake Hembree, who enjoyed a successful tenure as the Cavaliers’ coach and helped elevate that program.

Petite will be coaching soccer, and he’ll also be a history teacher at Callaway.

“The opportunity came about, and it was a great opportunity for me to try something different, and do something new,” Petite said. “I’d been at the Academy for 17 years total. I love the place, and I love those kids and those parents, so I’ll still be connected. But it was a chance, an opportunity I had to pursue.”

Petite was a busy man at LaGrange Academy.

He was the head coach for the boys’ and girls’ soccer teams that played in the fall and spring seasons respectively, and he was also the coach of the girls’ basketball team.

Petite had previously led five soccer teams to the state-championship game at LaGrange Academy, but each of those teams fell short.

Petite said he’ll look back fondly on the time he spent at LaGrange Academy.

He’s looking forward to being a part of the Callaway family, though, and he said he has enjoyed getting to know Pete Wiggins, Callaway’s head football coach and athletic director.

“Coach Wiggins has been phenomenal,” Petite said. “We’ve talked probably two or three times already, and texted back and forth. He helped me get set up.”

Petite also said he has been encouraged by the support offered by the soccer parents.

“I’ve got a great group of parents who are already all in, with helping with the field, with the concession stand, and all that kind of stuff is already rolling,” Petite said. “The kids have been super welcoming. They’re real excited about the future.”

Petite said he foresees a bright future for all of the sports teams at Callaway, especially with the impending move to Class AA.

“Callaway athletes across the board has a great opportunity this year going down to AA,” Petite said. “We’re set up to really take advantage of the situation if we play our cards right. It’s an exciting time to be a part of Callaway athletics, and Callaway high School. I’m looking forward to it.”

Mike Petite, the long-time coach at LaGrange Academy, is taking over as the boys’ soccer coach at Callaway High. Kevin Eckleberry | Daily News

http://lagrangenews.com/wp-content/uploads/sites/37/2016/06/web1_petite.jpgMike Petite, the long-time coach at LaGrange Academy, is taking over as the boys’ soccer coach at Callaway High. Kevin Eckleberry | Daily News

A champion is crowned