It’s been a summer-time fixture 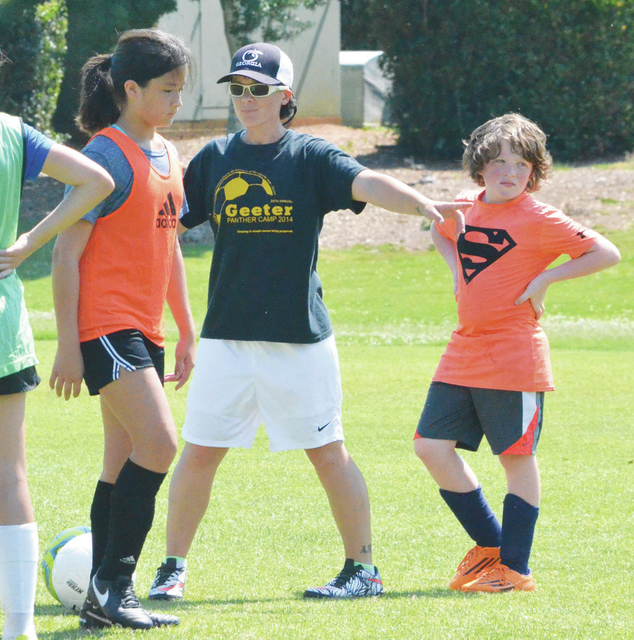 LAGRANGE – It’s been a special part of her summer for a couple of decades.

Akina Omae has been a participant in the Jeff Geeter soccer camp for about 20 years, first as a camper, and then as an instructor.

When Omae is making her summer plans, she always makes sure to find out when the camp is, and she circles those dates on her calendar.

This year’s camp wrapped up on Friday at the LaGrange College soccer field, and Omae was part of the staff that led the young players through the three hours of instruction time each day.

Omae was a prep star at LaGrange Academy, and she then went on to excel as a soccer player at LaGrange College while playing for Geeter.

“I look forward to it every year,” Omae said. “You feel like you’re part of something, a family. On top of that, with (Geeter) being my first college coach, I have a different bond with him. I enjoy it every year. I’d be very upset when the time comes that he’s like, no more. It’s been great.”

Geeter spent nearly 25 years as the head coach of the LaGrange College men’s team, and for much of that time he was also the coach of the women’s team.

Geeter’s final season as a soccer coach at LaGrange College was in the fall of 2013, but he has continued to offer a camp each summer.

One of Geeter’s favorite parts of the camp is seeing so many familiar faces each year among the campers and the instructors.

“I’ve been so lucky over the years, and continue to be, with the people that have worked it,” said Geeter, who has been offering the camp for close to 30 years. “Akina came to the camp, and she’s been working here ever since she was a student here.”

Geeter said there were around 80 boys and girls participating in this year’s camp.

“It’s been going real good,” Geeter said. “We’ve got a good bunch of folks working, and the kids have been real good. The age groups are fairly evened out. It’s been really fun. The kids are working hard, and having a good time.”

Geeter said having so many veterans of the camp helping him out makes things run smoothly.

“I give them the workouts in the morning, and turn them loose, and just kind of troll around and trouble shoot things here and there,” Geeter said.

One of those instructors who has been there for years is Mike Petite, who was back this summer.

Petite has been a long-time coach at LaGrange Academy, and he has taken over the boys’ soccer program at Callaway High.

Like Omae, Petite always looks forward to being a part of Geeter’s camp each summer.

“This is a great camp,” Petite said. “He’s been doing it what 26, 27 years, and I’ve been able to do it on and off when my schedule allows. And we’ve got 80, 85 kids out there, and all kinds of age groups, and just great attitudes, and the coaches are a lot of fun to be with. Obviously I’ve got a bunch of the Academy kids out here with me, so that’s always good. And the college kids that come out always have good attitudes, and are really ready to work hard. It’s a fun week.”

For the past two years, LaGrange College girls’ coach Fred Wagenaar has helped out at the camp, and he looks at it as an opportunity to “meet the community.”

“That’s really why I do it, and sort of hopefully get soccer a little bit more on the map here as well,” Wagenaar added. “Hopefully they had fun. It’s 90 degree weather so to get them running sometimes is a little bit of a challenge, but we had a couple of really good kids there.”

“Me and the men’s coach had a high-school camp last week, and this was sort of the same idea, to reach out to the local high schools, and try to grow the sport,” Wagenaar said.

Chris Keating, a LaGrange Academy graduate, talks to some of the young players at the LaGrange College soccer camp that wrapped up on Friday. Kevin Eckleberry | Daily News

http://lagrangenews.com/wp-content/uploads/sites/37/2016/06/web1_camp5-2.jpgChris Keating, a LaGrange Academy graduate, talks to some of the young players at the LaGrange College soccer camp that wrapped up on Friday. Kevin Eckleberry | Daily News

The youngest campers were on the field for two hours each day at LaGrange College. Kevin Eckleberry | Daily News

http://lagrangenews.com/wp-content/uploads/sites/37/2016/06/web1_camp6-1.jpgThe youngest campers were on the field for two hours each day at LaGrange College. Kevin Eckleberry | Daily News