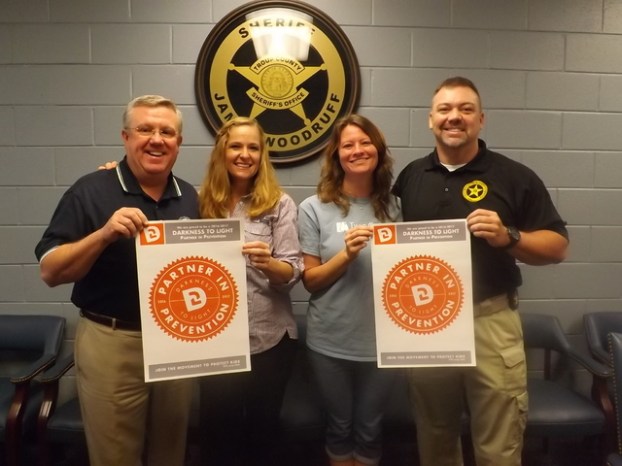 LaGRANGE — Twin Cedars Youth and Family Services is raising the bar when it comes to recognizing the signs of child sexual abuse.

The organization was honored by the Georgia Center for Child Advocacy for training the most people in Georgia during the local Darkness to Light program in April and May. The staff trained 610 adults during those two months.

Mike Angstadt, executive director of Twin Cedars, also received a special award as the individual who trained the most people in the state. Angstadt trained 160 people in April and May; he estimated he has taught between 300 and 400 people overall.

Kim Adams, director of the Children’s Advocacy Center at Twin Cedars, was presented with the state’s third place award after she trained 125 people over those two months.

In addition to the recognition, the organization was given 80 free Darkness to Light workbooks.

“My hopes are to use those books to get us along to 10 percent of the tipping point,” said Mckenzie Jackson, coordinator of the Darkness to Light program. “We’ve been blessed and we would like to bless others.”

Angstadt said several organizations in the community have jumped on board to train their staff in the signs of abuse, including the Troup County Sheriff’s Office, Rosemont Baptist Church and LaGrange Academy, among others. Those agencies are known as Partners in Prevention.

The Troup County School system now requires all their new hires to take the Darkness to Light training course, said Angstadt. Currently, Twin Cedars has held training in all Troup County middle schools, two of the high schools and all but one of the elementary schools.

The group has trained 2,359 people so far, 236 away from meeting their goal of teaching 5 percent of the population in Troup County before the third anniversary of the program, which is Jan. 1, 2017.

The next goal for the Darkness to Light program will be to teach 10 percent of the population the signs of child sexual abuse, said Angstadt.

“I think we see the 5 percent as a ‘B-plus.’ It’s better than good, but we seek that 10 percent,” he explained. “It’s like that Jim Collins book ‘Good To Great.’ Why be good, when you can be great? We want to move this community from good to great.”

One in 10 children will be sexually abused before the age of 18, said Angstadt and Jackson. They want people to be prepared to help those affected by abuse.

“Just knowing how to ask the simple questions — ‘Did something happen to you that you didn’t want to?’ Having that caring tone and then being prepared of a response that you might not want to hear,” Angstadt said.

“We want these types of conversations to happen naturally; not be uncomfortable or taboo anymore,” Jackson stated. “When your children go over to a friend’s or neighbor’s home, ask them, ‘What are the rules at your home?’ We want parents to have frank conversations with children about good touch and bad touch.”

Darkness to Light facilitators will train people to look for the signs of sexual abuse, how to proactively prevent it from happening within organizations — such as churches and recreational teams — and take information about the abuse, talk to victims and report it to the appropriate authorities.

Grant to fund ‘makerspace’ for THINC

LAGRANGE — THINC College & Career Academy is one of 10 schools nationwide to win a grant for a “makeover.”... read more