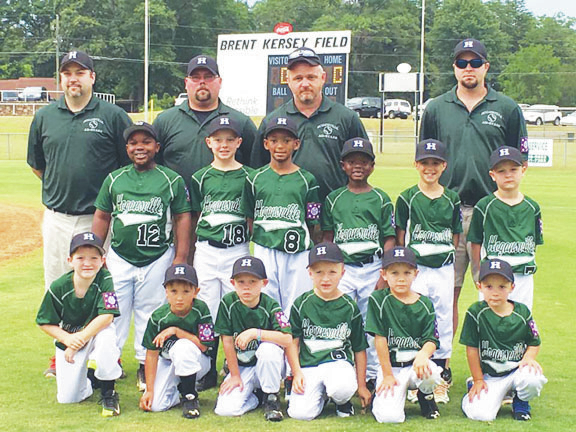 MANCHESTER – He was proud of his team.

The Hogansville all-stars didn’t win a game in the Dixie Youth Baseball 7-8-year-old state tournament in Manchester, but Kenny Adams was thrilled with the way his young players competed over the weekend, and with the way they stuck with it and kept their heads up.

Adams said it was new experience for almost all of his players, who were facing long odds in their state games.

“It was a recreation team from Hogansville, and we played against travel-ball teams that pull from several different counties, not just one city like we did,” Adams said. “With the kids being young, they played good fundamental baseball. They just didn’t have the caliber of experience that the older kids did, that the travel-ball teams did.”

Hogansville played four games in the state tournament and fell short in each of them, but Adams said it was still an overwhelmlingly positive experience.

“I was very proud of the kids for sticking in there and hanging with it, even though the odds were against them,” Adams said. “The coaches I had helping me, they were great guys for the kids. The parents that got the kids there and were cheering the kids on were great.”

Adams said he was appreciative of the sportsmanship shown by the other teams, and that was on display on Saturday afternoon when the games were played in extremely hot conditions.

“We had an issue with the kids getting too hot, and one of the teams that we were playing against actually gave (wet) towels out,” Adams said. “It was a good experience for them. We met some great people.”

While the players were unable to get a win in either the district tournament or the state tournament, Adams said it was still an encouraging and enjoyayable time for them.

“It was a new experience for them,” Adams said. “In the regular season, we played against kids our own age bracket, and did really well. They came in against the older kids, and bigger kids, but after every game they said we had fun, when are we going to play again. After the last game, they said they’re really looking forward to next year.”