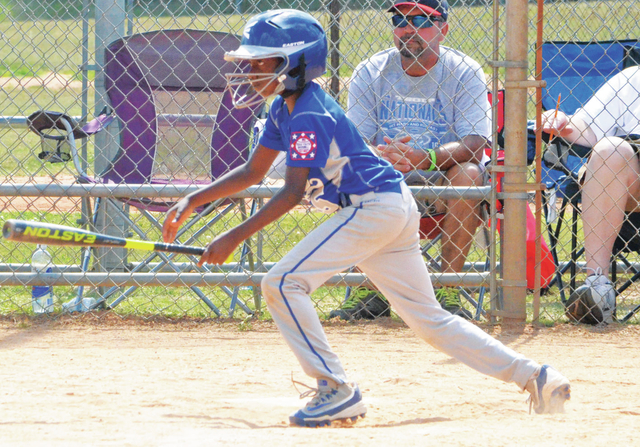 MANCHESTER – It all came together.

After losing their first two games in the Dixie Youth Baseball 7-8-year-old state tournament, the Troup National all-stars were back on the field on a sweltering Saturday afternoon hoping to experience some success.

Facing Swainsboro, Troup National exploded for 10 runs in the first inning, and it went on to claim a 14-4 victory.

Troup National, after losing its final game on Sunday, finished the tournament with a 1-3 record, and coach Charles Mosley was happy the players were able to enjoy a victory.

“They’re learning, and that win, I know that win had to feel good for them,” Mosley said. “I’m glad they won that game. I’m happy for them.”

Sunday’s game marked the end of the summer season for the Troup National team, which won a total of three games including the district and state tournaments.

Troup National went 2-2 in the district tournament and finished second to Thomaston, and it competed well in the state tournament against some quality competition.

“They’ve learned a lot,” Mosley said. “Some of these teams are really good. Yesterday a kid hits a home run, and our kids were like, wow. They’ve had fun. It’s been a great experience for them.”

Mosley said for most of the players, this summer is the first time they’ve competed in a tournament, and before the district tournament many of them hadn’t even been involved in a game where the score was kept.

Troup National lost to West Macon in its first state game on Friday, and on Saturday morning it fell to Brookwood National.

Troup National returned to the field on Saturday at 3:45 p.m., which was the hottest time of the day, and that meant the game was played in temperatures hovering neary the century mark.

After Swainsboro scored a single run in the top of the first inning, Troup National batted around in the bottom of the inning and plated 10 runs to take the lead.

Every member of the lineup reached base and contributed to the offensive onslaught, and Troup made that lead stand up.

Mosley was proud of how the players handled the excessive heat.

“To play in this weather, it’s got to be fun,” Mosley said. “You’ve got to love it, and they love it. There’s nothing more they’d rather be doing.”

One of those players was Mosley’s son, Chase, who was the catcher during Saturday afternoon’s game, and that was a tough task with the heat.

“Before the game, he complained a little bit, but during the game, he didn’t say a word,” Mosley said. “He hustled as much as he could. But it was hot. He did a good job.”

Mosley said he was appreciative of the work done by his fellow coaches, Brian Townsend, Roland Harris and Matt Perry, and he was also grateful for the support of the parents.

“They all have kids on the team, and they volunteered to help out,” Mosley said of the coaches. “That is a life-saver having people here willing to help. And we have great parents. I have some of the best parents.”

OF NOTE: For more photos from the tournament, check out facebook.com/LDNsports

Jeremiah Dunn, a member of the Troup National 7-8-year-old all-star team, slides in safely to second base during a game on Saturday in the state tournament in Manchester. Kevin Eckleberry | Daily News

http://lagrangenews.com/wp-content/uploads/sites/37/2016/06/web1_baseball7-2.jpgJeremiah Dunn, a member of the Troup National 7-8-year-old all-star team, slides in safely to second base during a game on Saturday in the state tournament in Manchester. Kevin Eckleberry | Daily News

Troup’s Chase Mosley makes his way to second base after reaching on a hit during a state-tournament game on Saturday. Kevin Eckleberry | Daily News

http://lagrangenews.com/wp-content/uploads/sites/37/2016/06/web1_baseball11-2.jpgTroup’s Chase Mosley makes his way to second base after reaching on a hit during a state-tournament game on Saturday. Kevin Eckleberry | Daily News