It’s the next step for former Granger 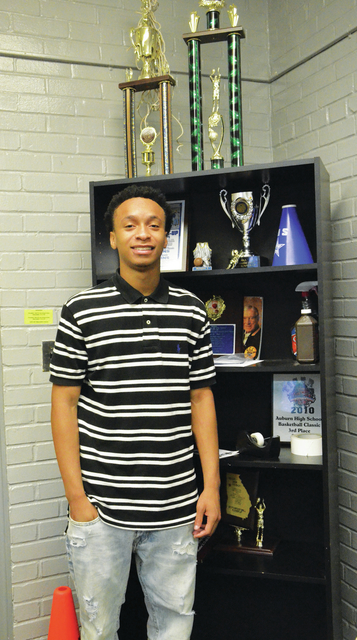 LAGRANGE – Qua Epps made the most of his final go-around as a high-school basketball player.

Heading into his senior season, Qua Epps had seen limited varsity playing on the LaGrange High basketball team, but he never got discouraged.

Epps knew there were some talented guards ahead of him in the rotation, so he just stayed patient, worked hard, and tried to be as prepared as possible for when his moment came.

“I just wanted to work hard, and practice hard, and everything would fall into place,” Epps said.

For Epps, everything did indeed fall into place during the 2015-2016 season, which was his final one at LaGrange.

While Epps wasn’t a starter, he was one of the first players off the bench along with fellow senior guard Alex Dantzler, and he had an outstanding season.

Epps was an effective shooter who provided instant offense when he’d come into a game, and he was also a standout all-around player.

Epps’ contributions helped the Grangers enjoy a successful season that included a region championship, as well as a victory in the state tournament.

When Epps began searching for a college home, one of the schools that showed an interest in him was Southeast Community College.

It’s a program that has successfully recruited LaGrange High players before, and they have done well at the two-year school in Lincoln, Neb.

Southeast offered Epps a basketball scholarship, and he accepted.

Epps made it official earlier this month when he signed his letter of intent, and when November rolls around, he’ll be back on the basketball court, this time as a college player.

“It’s really special,” Epps said. “It’s just something I love to do. I love to play basketball.”

The Grangers typically play more than 20 games during the summer against top-notch competition, and Epps was one of the marquee players a year ago.

Derieko Smith and LaPerion Perry were LaGrange’s starting guards last season, but they were both mostly unavailable last summer because of their football responsibilities.

“What helped Qua was, in the summer, Rico and LaPerion were out, and he played a lot of summer ball against good teams, and had some success, and that helped him build confidence all the way around,” Veal said.

During the season, Veal said “I can think of a lot of big shots and plays he had for us in big games against good teams. He plays hard. He can handle the ball. He can get hot from the outside.”

When Epps wasn’t on the court, Veal said he was always supportive of his teammates.

Epps’ senior season was special to him, and not just because of the success the team enjoyed.

He was grateful to have one final season to spend with his friends and teammates.

“I enjoyed it a lot,” Epps said. “I got to play with everybody I’ve been playing with since I was very little. We got to play together one last time.”

Epps is the fifth member of the 2015-2016 team to sign a letter of intent to play a college sport.

Qua Epps brings the ball up the court during a game last season. Epps has signed a letter of intent to play at Southeast Community College in Nebraska. Kevin Eckleberry | Daily News

http://lagrangenews.com/wp-content/uploads/sites/37/2016/06/web1_Epps.jpgQua Epps brings the ball up the court during a game last season. Epps has signed a letter of intent to play at Southeast Community College in Nebraska. Kevin Eckleberry | Daily News

Qua Epps made the most of his final season as a LaGrange High basketball player, and he helped lead the team to a region championship. Kevin Eckleberry | Daily News

http://lagrangenews.com/wp-content/uploads/sites/37/2016/06/web1_epps2.jpgQua Epps made the most of his final season as a LaGrange High basketball player, and he helped lead the team to a region championship. Kevin Eckleberry | Daily News