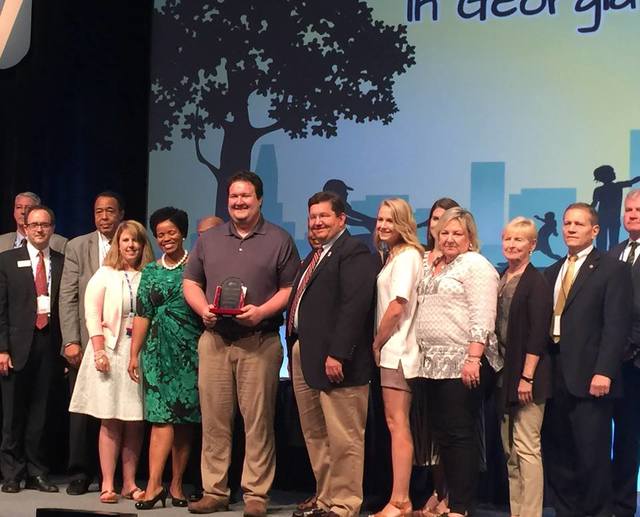 SAVANNAH — The Georgia Municipal Association inducted former LaGrange City Manager Tom Hall into the Municipal Government Hall of Fame at the association’s annual convention in Savannah on Monday. Hall died Feb. 16. The award was accepted on his behalf by his son, Dylan.

The Hall of Fame honors municipal officials who are deemed to exemplify the best in public service and have made extraordinary contributions to their communities and Georgia’s cities.

During his tenure, he supervised the city’s revenue shift from property taxes to utilities; purchased and grew the cable television enterprise; started and expanded the city’s telecommunication business; began curbside garbage collection and recycling services; guided the city through its service delivery strategy negotiations; and established the city municipal court and probation program.

In 2000, the city was named as one of the Most Intelligent Cities by the World Teleport Association and as City of Excellence by GMA and Georgia Trend in 2001.

“Tom was a tireless advocate for cities and a fierce protector of municipal home rule,” said GMA Executive Director Lamar Norton. “Whenever a significant policy issue emerged that required careful thought and analysis, GMA staff was quick to call on Tom for his insight and advice. And he answered the call.”

He served on several GMA task forces, including one in 2007 that led to successful efforts to renegotiate the special-purpose, local-option sales tax law to give cities a more equitable share of revenues. He served on the GMA Legislative Policy Council and was a frequent speaker at GMA conferences.

“Few managers had the depth of knowledge that he did on such a wide range of subjects, including telecommunications, public works, utilities and technology,” said Norton. “If you wanted to hear about a best practice, Tom was definitely a ‘go to’ person.”

Also at the meeting, Mayor Jim Thornton was elected to the GMA’s board of directors.

Thornton will serve as the chair of the association’s municipal government policy committee, one of six standing policy committees, and as a member of the Legislative Policy Council. The LPC meets four times a year to update GMA’s policy platform and, throughout the legislative session, holds weekly conference calls to monitor and act upon legislation at the Capitol.

“We are pleased to have Mayor Thornton taking on this leadership position,” said Norton. “He’s well respected by his colleagues, and I’m sure he’ll provide great leadership to cities across Georgia.”

Based in Atlanta, GMA is a voluntary, nonprofit organization that provides legislative advocacy, educational, employee benefit and consulting services to its 520 member cities.

LaGrange representatives accept an award naming late City Manager Tom Hall to the Georgia Municipal Association’s Hall of Fame on Monday in Savannah. The Hall of Fame honors individuals who made outstanding contributions to their community. Hall died suddenly in February.

http://lagrangenews.com/wp-content/uploads/sites/37/2016/06/web1_HallOfFame.jpgLaGrange representatives accept an award naming late City Manager Tom Hall to the Georgia Municipal Association’s Hall of Fame on Monday in Savannah. The Hall of Fame honors individuals who made outstanding contributions to their community. Hall died suddenly in February.