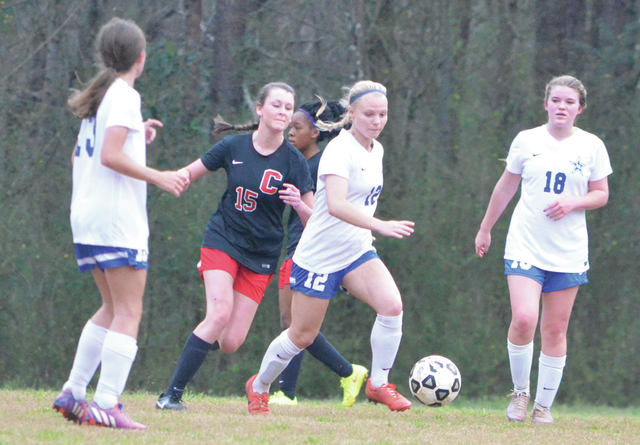 For the second straight year, the local high-school teams are participating in a summer soccer league, and once again Callaway is serving as the host school, and Tuesday is league night.

There are even more teams this year.

Last year only the local boys’ teams participated, but this year there are girls’ teams competing as well.

Callaway, LaGrange, Troup, LaGrange Academy and Lafayette Christian each have teams participating, and Harris County is taking part in the league as well.

League play began last week, and it continues through July 28 when a season-ending tournament will be held.

While the score is kept for each game, it’s not really about winning and losing.

The summer league gives the coaches an opportunity to become familiar with the players they’ll be leading onto the field when a new season rolls around next spring.

For a team like the Troup Tigers, that’s particularly important since there will be so many key players to replace next season.

The 2015 team was a senior-laden one, so head coach Jase Crenshaw is using the summer as a way to get a handle on what his team will look like in February when the season begins.

The Tigers opened their summer schedule last week, and they had a bye this week.

“We’re losing a keeper, we’re losing a forward, two midfielders, so we’ll definitely be looking for holes to fill,” Crenshaw said. “This is a great chance to get a first look at those guys.”

The summer-league games feature a seven-on-seven format, and while that’s different from the 11-on-11 games that take place during the season, Crenshaw said it’s still valuable to see the players in a competitive situation.

“They have experience at practice, but in a game situation, they’ll get to play someone else,” Crenshaw said. “There’s nothing like that opportunity, so it’s nice to see them out there getting to push for possibly being a starter next year.”

The Callaway Lady Cavaliers are also competing this summer, and coach Shawna Yawn said she’s grateful the players are willing to take the time out of their summer to practice and play games.

“They’re dedicated. They love soccer,” Yawn said. “They come out any time they get the opportunity.”

One of those players is Kelly Carlisle, a three-sport athlete who has a lot on her plate, but she couldn’t pass up the chance to come out and play the sport that brings her so much joy.

“Anytime I get the chance to play soccer, I love to come out,” she said.

Yawn said she has enjoyed seeing players from all the different schools this summer since she has coached so many of them in travel soccer.

Andy Fritchley, who is heading into his second season as the coach of the LaGrange Lady Grangers, said the summer is a great time “to work on your team chemistry,” and it also gives the upcoming freshmen an opportunity to adjust to high-school soccer.

“You’ve got eighth graders who are playing up,” Fritchley said. “It’s really nice for them to be able to play in an environment that’s fairly low pressure.”

Fritchley said the seven-on-seven format is ideal for the summer.

“It’s great that it’s seven-on-seven,” he said. “You don’t have to have quite the numbers. People are on and off in the summer. We experiment, we try people at different positions, try out different keepers.”

Keita Placide, LaGrange High’s veteran boys’ coach, was a driving force behind getting the league started last summer, and he said it’s a nice chance for players to get some time on the field in a low-pressure environment.

“It’s one of the better parts of the summer,” he said. “You just relax and enjoy the game, and learn. You come out here and try new stuff.”

The LaGrange Lady Grangers and Troup Tigers faced off at Callaway High on Tuesday in a summer-league game. The league continues through July 28. Kevin Eckleberry | Daily News

Lafayette Christian and LaGrange High met in one of the summer-league games at Callaway High on Tuesday. Kevin Eckleberry | Daily News

http://lagrangenews.com/wp-content/uploads/sites/37/2016/06/web1_soccer3-1.jpgLafayette Christian and LaGrange High met in one of the summer-league games at Callaway High on Tuesday. Kevin Eckleberry | Daily News

Callaway’s Chloe McGuffin chases a ball down during a summer-league game against Troup on Tuesday. Kevin Eckleberry | Daily News

http://lagrangenews.com/wp-content/uploads/sites/37/2016/06/web1_soccer4-1.jpgCallaway’s Chloe McGuffin chases a ball down during a summer-league game against Troup on Tuesday. Kevin Eckleberry | Daily News

The boys’ and girls’ teams from Callaway met in one of Tuesday’s summer-league games. Kevin Eckleberry | Daily News