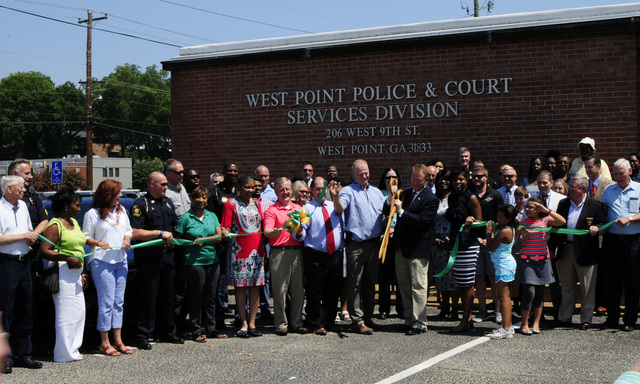 WEST POINT — The city’s police department is no longer in a basement.

Local leaders and LaGrange-Troup County Chamber of Commerce officials cut the ribbon on the new West Point Police Department at the corner of West 9th Street and East 10th Street on Thursday.

At about 9,000 square feet, the renovated building, which used to be a telecommunications center, provides the department with about three times the space of its previous housing in the bottom floor of City Hall.

“This facility was designed and built with the community in mind,” he said. “It’s centrally located to our residential area and it’s set up and laid out to be more user friendly to put people where they can come in here and have a little bit of peace and keep some dignity … if they’re victims of crimes. We have a facility that can actually take care of their needs without parading people around if they’re having to talk about things that are sensitive.”

Bailey called the building the community’s “home as much as it is our home.” Mayor Steve Tramell also emphasized the community component of the building, but said it also provides a better home to officers.

“You take pride in a department like this,” he said to the crowd gathered for the ribbon cutting ceremony. “… It’s a great place for our men and women that protect and serve us to come here and work, and I’m glad that we have a beautiful place like this for ya’ll to be able to — you deserve that.”

City Manager Ed Moon credited the City Council with planning and setting aside funds over the last decade for improvements like the new police department.

“We now, with the christening of this building, have renovated or built new facilities for every single (city) department,” Moon said. “It’s great for the city, it’s great for our employees to have a good place to work. It’s great for our citizens, who have a great place to come to to do business.”

Police and city staff also worked on the renovation under Bailey’s supervision to help ease costs, Moon said. The budget for the project, on which work began last year, was $250,000.

“Thanks City Council, thanks city staff for working diligently and going above and beyond what needed to be done,” Moon said to the crowd.

Bailey said he was surprised at how many people attended Thursday’s event. The new department was packed with people — many area law enforcement officers — who wanted to look at the new facility and its amenities.

“This (turnout) is a lot bigger turnout than I was anticipating, but it means a lot to me personally and I know to the men and women who serve here, just because we do take pride in this,” he said. “We do take pride in our town and community.

“I’ve said many times the difference between living in a community and a city is people, and West Point is a community, not a city. We have partnerships and relationship with everybody. … So this is your home as much as it is our home, and I hope that you are proud of it because we are, and I can’t thank (enough) the men and women of our department for making it happen and the service they provide.”

Visitors pack the lobby of the new West Point Police Department as they tour the new facility during a ribbon cutting ceremony on Thursday.

http://lagrangenews.com/wp-content/uploads/sites/37/2016/07/web1_web0701WPPDribbon2.jpgVisitors pack the lobby of the new West Point Police Department as they tour the new facility during a ribbon cutting ceremony on Thursday.