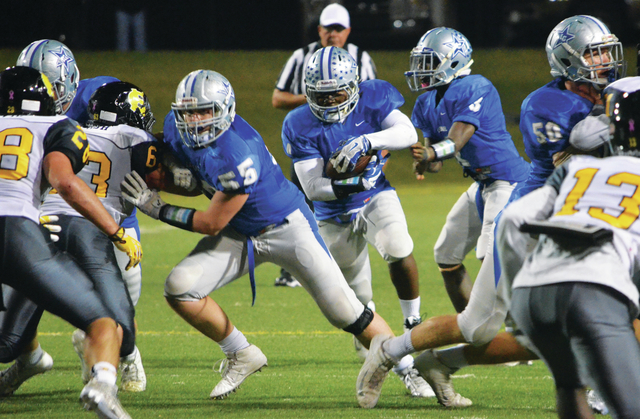 LAGRANGE – Without their all-state quarterback, the show goes on for the LaGrange Grangers.

Senior LaPerion Perry, who had a remarkable junior season that netted him a handful of postseason honors, is out of commission at the moment after undergoing hip surgery recently, and when he’ll be able to play again is uncertain.

Without Perry, a handful of quarterbacks have been taking the snaps this summer, giving head coach Dialleo Burks a chance to evaluate them leading up to the season opener on Aug. 19 against Callaway.

Last week, the quarterbacks and all of the players got plenty of time to make an impression on Burks and the other coaches.

LaGrange was on the field for two camps, including a full-contact 11-on-11 camp, as well as a seven-on-seven competition two days later.

“We’re really looking at this quarterback race that we have,” Burks said. “LaPerion has had surgery, so we don’t know when we’re going to get him back. We’ve had some good looking guys.”

The player with the most experience at quarterback is senior Amad Ogletree, who took the bulk of the snaps during his sophomore season before giving way to Perry last year.

Ogletree, who was a wide receiver and running back a year ago, has been one of the team’s most impressive players this summer, according to Burks.

“He’s really had a great summer. He’s working hard,” Burks said. “He’s always been a hard worker, but you can tell he’s of the mindset that I don’t want to be stopped. Leading, he’s vocal. When guys work that way, you can’t expect nothing but good things to happen to him.”

“Those guys, they’ve had great summers as well as far as showing leadership on the team, rallying troops when it gets tough,” Burks said.

The first one against Jordan and River Ridge was full contact, and LaGrange then hosted a seven-on-seven tournament.

“The padded camp, our guys finished on top of the world,” Burks said. “For the seven-on-seven, it was a little drawn out. They were exhausted.”

For the seven-on-seven event, the LaGrange players were divided into two teams, which Burks felt would be beneficial.

This week, LaGrange hasn’t had any team camps, focusing solely on the daily workouts at the school.

Since the start of June, LaGrange has been offering voluntary workouts from Monday through Thursday, and Burks said the participation has been tremendous.

“I was going through our workout list today,” Burks said. “We had a total of 18 workouts, and we’ve had a total of 54 guys that have 16 to 18 workouts. That’s 54 guys. I can’t ask for nothing else from them. They’re here, so it’s on us to make sure we’re doing our jobs (as coaches). That was exciting to see.”

As for Perry, while he’s unable to play, Burks said he has still shown tremendous leadership.

Perry has been with the team all summer, encouraging his teammates, and even providing some coaching on occasion.

“He came out for the seven-on-seven for a little bit and watched,” Burks said. “Immediately, he was watching the defense, and he noticed the safety wasn’t in the right spot.”

Burks said he admires the way Perry has handled a difficult situation.

“His character is unbelievable, just what he has inside of him,” Burks said.

Last season, Perry was injured in the regular-season finale, and he was unable to play in a mini-playoff game that would determine whether the Grangers made it to the state playoffs or not.

Although Perry had been told he was out of action, Burks remembers seeing him suited up during the playoff game, which LaGrange lost.

“Even for the mini-game, we knew going in that he wasn’t going to be able to play because of his toe,” Burks said. “When things were on the line, and we were really tested, I looked beside me and he was fully dressed. He was ready to go. He said I don’t want it to end like this. It says a lot about what he has inside of him.”

LaGrange’s offense gets ready to run a play during a scrimmage against River Ridge last week. That was the first of two team camps LaGrange participated in last week. Kevin Eckleberry | Daily News

http://lagrangenews.com/wp-content/uploads/sites/37/2016/07/web1_LHS1.jpgLaGrange’s offense gets ready to run a play during a scrimmage against River Ridge last week. That was the first of two team camps LaGrange participated in last week. Kevin Eckleberry | Daily News

LaGrange runs a play during an 11-on-11 scrimmage game this summer. Kevin Eckleberry | Daily News

http://lagrangenews.com/wp-content/uploads/sites/37/2016/07/web1_LHS2.jpgLaGrange runs a play during an 11-on-11 scrimmage game this summer. Kevin Eckleberry | Daily News