‘You’ve just got to be good’ 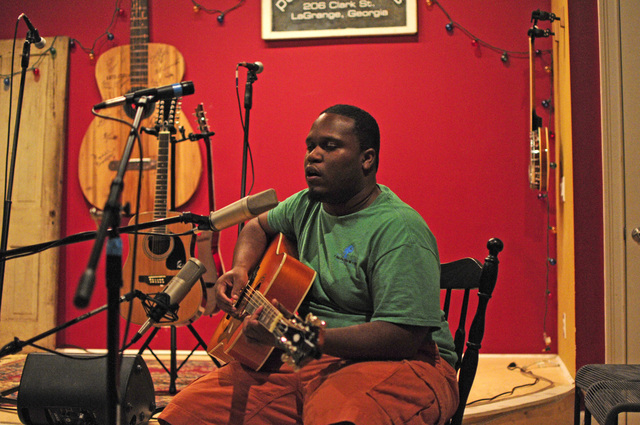 LaGRANGE — The guitar looks like it belongs in Jontavious Willis’ hands.

The 20-year-old Greenville native and Callaway High School graduate’s fingers fly across the fret board with little apparent effort. He seems to play almost as easily as most people speak, and the instrument provides him a voice that speaks from deep within.

The young singer-songwriter has already made a name for himself as a prodigy to the dwindling blues scene. A multi-instrumentalist, he also plays banjo, slide guitar and harmonica, among others.

Willis also is a seasoned singer. He began at 3 years old in Mount Pilgrim Baptist Church, singing gospel music with his grandfather. Gospel still inspires his music, but he soon found his roots in the blues.

“I pursued it and that’s where we’re at now,” he said Tuesday as he sat in a makeshift recording studio at Pure Life Studios on Clark Street, starting the process of creating his first album.

Although the blues is what Willis has become known for, Willis said his style isn’t limited to it. Ragtime, R&B, gospel and country also are part of his musical repertoire.

When Willis first started playing guitar about six years ago, he learned by himself. He didn’t even know how to tune a guitar, he said, so he tuned it to his voice and learned to play with its unique tuning.

He just began using standard-tuned guitars about six months ago, but only one song on his upcoming album will feature his unique tuning.

Willis spent two days of the past week recording his first full album at the LaGrange-based Pure Life Studios, which has served as an acoustic listening room for the past year. Owner Maggie McDonald said Willis is the most unique musician she’s ever met, and offered the studio for him to record his debut — a first for Pure Life as well.

How the pair connected could be happenstance or fate. McDonald said she had heard of Willis and tried to track him down unsuccessfully. One night during a show, Willis came up to her during intermission and said, “I know how to play,” McDonald said. It wasn’t until the next day she realized who he was.

“I had been looking for him all summer,” she said.

Willis eventually floated the idea of recording an album.

“He mentioned recording and I said, ‘Oh my gosh, yes,’” recalled McDonald, who then began to help pull the people together to help make the recording possible. “… And everything just kind of connected.”

Willis planned 12 tracks for the album, which he said varies in style.

“I hope it touches each person individually,” Willis said.

Asked if he felt it was hard to breakout in the music scene as an African-American in the South, Willis’ answer was quick.

The album recording is being produced by Thomas Martino with mastering and scheduling by Pat Patten and assistance from McDonald’s son Sam. Coe Cloud is set to work on graphic design for the album with Amy McDow handling photography.

A release date has not been set for its release.

Jontavious Willis, 20, of Greenville, practices in Pure Life Studios on Tuesday to begin recording his debut album. The album will be the young blues musician’s debut and is also the first time Pure Life has hosted a studio recording.

http://lagrangenews.com/wp-content/uploads/sites/37/2016/07/web1_web0703Jontavious01ba-1.jpgJontavious Willis, 20, of Greenville, practices in Pure Life Studios on Tuesday to begin recording his debut album. The album will be the young blues musician’s debut and is also the first time Pure Life has hosted a studio recording.