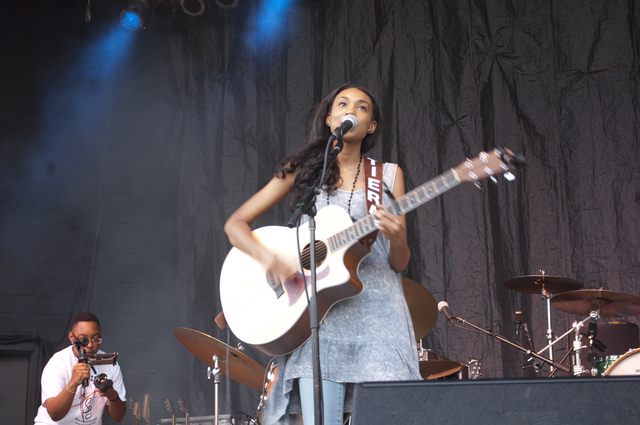 LaGRANGE — The Charlie Daniels Band thrilled a sold-out crowd at Sweetland Amphitheatre on Sunday night, but it might be the opening act you’ll want to keep your eyes on.

18-year-old Tiera Leftwich, an up-and-coming country musician from suburban Birmingham, Alabama, started writing original country music before she could drive a car. Four years later, she’s opening for one of the most legendary acts on the honky tonk scene.

She laughed backstage on Sunday as she talked about her music, noting it has the air of a high school freshman.

“They’re all about boys, so being a freshman, it kind of shows,” she said with a light-hearted laugh.

Sunday was a big deal for Tiera, who uses her first name as her stage name.

“I’ve been singing ever since I was was little, but my freshman year of high school I really started performing more,” she said. “I performed around my hometown, and then I got my first gig in Nashville, which was at the Listening Room Cafe, and then I played at The Bluebird.”

She came to Nashville, Tennessee, by way of a contest sponsored by the Song Suffragettes, a female collective of Nashville musicians that promote women in music.

“They’re all about empowering women, because if you listen on the radio, it’s mostly guys on the radio, so they’re all about just getting up-and-coming female artists out there,” she said. “They had a sign-up sheet on their website, and I just signed up, then auditioned, and a couple months later I went up to perform with them.”

Even with all the performing and stage lights, Tiera is still an 18 year old who just graduated high school. Life is coming at her fast, but she’s got a plan for the future, and her mother, Natarsha Leftwich, isn’t worried.

“She’s always been a straight A student, and she’s learned how to keep the balance,” her mother said backstage at Sweetland on Sunday.

Her family travels with Tiera when she’s on the road, and her parents have been “super supportive,” Tiera said.

Her mother can’t wait to see her “baby’s name in lights,” she said, but she knows it will be a balancing act when Tiera heads to the University of North Alabama in the fall, where she plans to study the entertainment industry.

Tiera said she’s been influenced by Dolly Parton and Carrie Underwood — and who knows, maybe she’s the next one to make such an impact on country music, her mother mused.

Tiera’s favorite Dolly Parton song, though? “Coat of Many Colors,” she said.

To learn more about Tiera, or to find her music, visit her website at www.tieramusic.com to find her on Apple iTunes.

Charlie Daniels performs Sunday at Sweetland Amphitheatre at Boyd Park. The show was sold out.

http://lagrangenews.com/wp-content/uploads/sites/37/2016/07/web1_CharlieDaniel02WEB.jpgCharlie Daniels performs Sunday at Sweetland Amphitheatre at Boyd Park. The show was sold out.

Tiera Leftwich performs Sunday at Sweetland Amphitheatre. The 18 year old from suburban Birmingham, Alabama, was one of two opening acts for the Charlie Daniels Band.

http://lagrangenews.com/wp-content/uploads/sites/37/2016/07/web1_CharlieDaniel01WEB.jpgTiera Leftwich performs Sunday at Sweetland Amphitheatre. The 18 year old from suburban Birmingham, Alabama, was one of two opening acts for the Charlie Daniels Band.