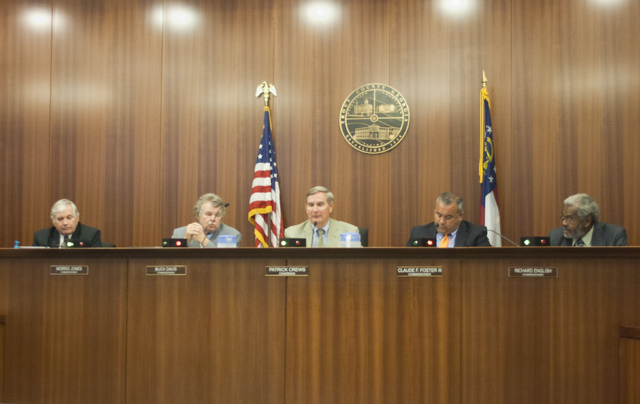 County commissioners could have approved a special use permit for rural tourism Tuesday, but instead opted to continue discussion for two more weeks following several residents’ complaints about the proposal. Click here to download a high-resolution map of the proposed corn maze.

Permit applicants David Spurgeon, Jerry Cram and Cheryl Cram are asking commissioners to allow them to use nearly 33 acres to build Grumpy’s Corn Maze with a hay ride trail, pumpkin patches and pony rides at 1510 Mobley Bridge Road near Hogansville. The property is owned by Spurgeon, according to property tax records. It is zoned for single-family, medium density and for Spurgeon to run a for-profit corn maze on the property, a special use for rural tourism permit from the county is required. Spurgeon and the Crams applied for the permit on May 5.

“As a family, one of the things we look forward to every fall is going to the corn maze,” the permit seekers wrote in their application. “We want to bring that experience to Hogansville, Troup County and the surrounding areas. It provides a much needed family experience, away from electronics, which allows them to reconnect and build a memory. It is inexpensive and age-appropriate.”

But local residents fear the maze will draw more traffic, noise and light pollution to their otherwise residential and rural community.

Addressing commissioners, Joan Stafford of Mobley Bridge Road said the maze would “impact our lives a lot more than them. The nice quiet country life will be gone.”

Stafford presented commissioners with a petition from local residents who signed in opposition of the maze.

Bill Templeton of nearby Deerfield Road told commissioners he thought the driveway would be inadequete for the traffic volume, and he had concerns about the ability of Mobley Bridge Road to carry the additional traffic.

James Emery, country roads engineer, told commissioners Mobley Bridge is designed to carry significantly more traffic than it carries today, with only about 10 percent of its total capacity being used.

Similarly, the permit applicants have agreed as a condition of the permit to increase the width of the driveway to carry two-way traffic. The applicants also made other concessions in their request; they agreed to a 30-foot buffer around the property, no amplified music or noise and to close by 9 p.m. every day. The corn maze and accompanying features would also only be open during September and October yearly.

For Barbara Nivens of Mobley Bridge Road, that isn’t enough.

“My biggest concern is my property value,” Nivens told commissioners. “No one has addressed that. I don’t want to see a reduction in my property value, and I am very much against this. There are plenty of us out there who have spent our hard-earned money to live out there, and I didn’t move out there to have a business grow up around me.”

The permit application is slated to be on the county commission’s agenda at their next regularly scheduled meeting in two weeks.

A map shows the proposed layout of Grumpy’s Corn Maze at 1510 Mobley Bridge Road near Hogansville.

County commissioners cast their votes regarding a special use permit for rural tourism on Monday during a meeting at the Troup County Government Center. The board voted 3-2 to continue consideration of the permit until the board’s next meeting in two weeks.

http://lagrangenews.com/wp-content/uploads/sites/37/2016/07/web1_CommissionWEB.jpgCounty commissioners cast their votes regarding a special use permit for rural tourism on Monday during a meeting at the Troup County Government Center. The board voted 3-2 to continue consideration of the permit until the board’s next meeting in two weeks.