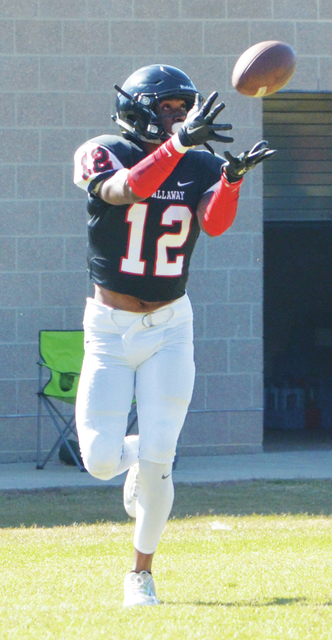 Sanders, an electrifying player for the Cavaliers whether he’s at quarterback or wide receiver, has all sorts of options when it comes to choosing a college.

Among the schools that have offered Sanders a football scholarship is the University of Georgia, and he’s got a long list of offers from other schools as well.

For Sanders, there is no hurry to make a decision.

He wants to take his time and pick the school that’s the best fit for him so that he’s 100 confident in his decision when he signs his letter of intent in February.

“It’ll just be whatever’s best for me and my family,” Sanders said last week, adding that he has no timeline for when he’ll decide.

Sanders has already taken visits to Ole Miss and Georgia this summer, and he said he’ll visit Auburn and Mississippi State in the coming weeks.

Those schools are all recruiting Sanders as a wide receiver.

“It’s been great,” Sanders said of the recruiting process. “All of the coaches showing me love.”

It’s been a busy summer for Sanders.

In addition to the recruiting trips, he has participated in Callaway’s summer football program, and he has also been playing basketball for his travel team, the Atlanta Express.

While Sanders is being recruited mostly to play football, he’s also an exceptional basketball player who has started for three years and was the Region 5-AAA player of the year last season.

The Express recently completed a trip to California for a tournament where it went 2-2, and Sanders said “it was a great experience.”

Sanders’ primary focus at the moment is getting ready for a season that is less than two months away.

Callaway will play a presesason game against Northside on Aug. 12 before opening the season a week later against LaGrange.

“I’m excited,” Sanders said. “I’m just trying to see what we’ve got going this year, see if we can make a run in the state playoffs.”

Sanders didn’t play football as a freshman, and he soared onto the stage as a sophomore and was a big-time receiver while catching balls from current Georgia Bulldog Terry Godwin.

For the 2015 season, Sanders was moved to quarterback, and he was excelling at that position before he was injured midway through the season.

Sanders ended up coming back for the state playoffs, and he moved back to wide receiver with Dylan Johnson playing quarterback.

This summer, Sanders has been working at quarterback and wide receiver.

“Coach will put me wherever he thinks I can help the team,” Sanders said.

Last summer, Sanders was still learning how to play the quarterback position, and the learning curve continued into the season.

Sanders said “it’s comfortable to me now. Last year when I first started, I had a lot to learn.”

Callaway offensive coordinator Matt Napier said Sanders, like previous superstar players at the school, is all about doing what’s best for the team.

“He’s kind of like Terry, and Quan (Bray), and Ricky Parks, and Tez Parks, and all those guys,” Napier said. “They’re all team players. They’ll do anything that you need them to do. They’re willing to do whatever it takes for the team to win, and I think that’s part of why we’ve been successful, is we have guys that are like that, that are team players. He’s a long the line of those. And that’s something you can sell to recruiters. You get him, he’s not going to be pigeon-holed. He can be versatile.”

“He’s football intelligent, because he’s had to play different positions,” Napier said. “Particularly the quarterback position, they understand what they’ve got in front of them, and the defenses. It brings an understanding and a knowledge of the game.”

“He can play quarterback, he can play receiver, he can play in the secondary,” Wiggins said. “He just brings a lot to the table with his speed. He’s worked hard this summer. I’m really proud of Braylon’s leadership on and off the field.”

As for this coming season, Sanders said “the sky’s the limit. We can take ourselves as far as we want to go.”