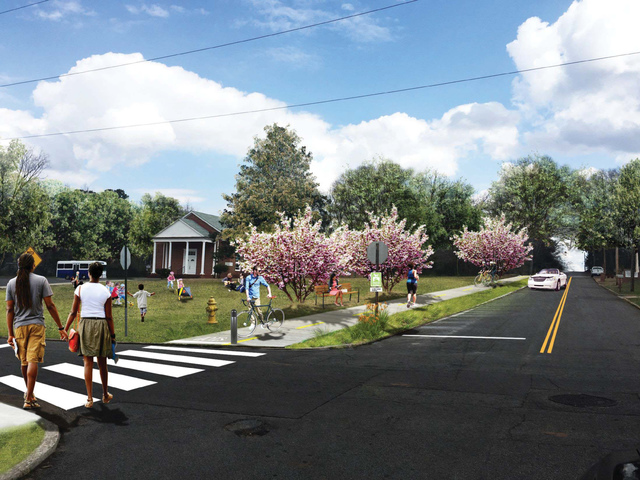 LaGRANGE — City officials plan to host a public meeting July 19 regarding a proposed bike and walking trail that would run throughout the city and connect neighborhoods, schools, parks and businesses.

The meeting will be an opportunity for residents to learn about the proposed route, see renderings of the trail, ask questions of the trail’s planners and provide feedback, said Leigh Threadgill, city planner.

Dubbed The Thread in a nod to LaGrange’s textile past, and also because it connects the community, the plan includes 27 miles of trail that connect all four quadrants of LaGrange. Users would be able to walk or ride their bike on a dedicated, no-cars-allowed trail from Hollis Hand Elementary School to the Mike Daniel Recreation Center on Lafayette Parkway, if they wanted.

Susan Bowie, a LaGrange resident and a member of the trail advocacy group Friends of The Thread, said there’s a lot to like about the plan, but the best part is that it is for everybody.

“The biggest benefit of this, although it costs money to build, it’s free once it’s built and it’s for everybody,” she said. “It doesn’t discriminate, and it’s not something you have to buy a ticket to go to, or pay rent to use. It’s just going to be available for everybody, and I love that.”

Similar trails exist in cities around Georgia, including Carrollton, Atlanta and St. Simon’s island. The trails are typically 8 to 12 feet wide, paved, two-lane paths marked with various trail heads and signage. In Carrollton, the Greenbelt Trail is a 16-mile loop that connects shopping, residential neighborhoods, the University of West Georgia, a disc golf course and many other amenities and employers.

Rory Wojcik, a recently elected Carrollton City Council member, ran on a platform of creating a pedestrian friendly community, and said the Greenbelt has been a transformative feature for LaGrange’s neighbor to the north.

“The Greenbelt has benefited Carrollton in a number of ways, from a recreational standpoint with physical health, but also looking at emotional well-being, transportation and really changing our city from being automobile centric to being a more pedestrian and cycle friendly community,” he told the Daily News by phone.

He said at first, some property owners weren’t thrilled with the idea of a public trail running through their neighborhoods, but once the project was completed, attitudes changed.

“Anybody that was against it will probably not admit it anymore,” he said. “Everybody in the community has been praising the Greenbelt for a lot of different reasons. It’s a boon to property values, and quality of life in general.”

The key to the Greenbelt’s success, he said, was making it something everyone in every community can use. He offered LaGrange some advice, if the community chooses to go forward with the project.

City officials and Friends of the Thread visited Carrollton in May and toured the Greenbelt trail.

“I was actually surprised at how many people were on the trail at noon on a Wednesday,” said LaGrange City Council member Mark Mitchell. “There were nurses that were walking on their lunch break, bikers, all kinds of people.”

Build out of a “model mile” is already in its early stages for The Thread. The 12-foot-wide, concrete trail is slated to begin near West Haralson Street and follow north through land between North Greenwood and Gordon streets toward Granger Park. Survey crews have already conducted the ground work to begin designing the segment.

Cost estimates and funding sources for the trail are still under consideration.

A rendering shows what the proposed Thread bike and walking trail might look like running north on Church Street toward Sweetland Amphitheatre.

http://lagrangenews.com/wp-content/uploads/sites/37/2016/07/web1_ThreadChurchStWEB.jpgA rendering shows what the proposed Thread bike and walking trail might look like running north on Church Street toward Sweetland Amphitheatre.

A rendering shows what the proposed Thread bike and walking trail might look like near the William J. Griggs Recreation Center near Glenn Robertson Drive.

http://lagrangenews.com/wp-content/uploads/sites/37/2016/07/web1_ThreadGriggsCenterWEB.jpgA rendering shows what the proposed Thread bike and walking trail might look like near the William J. Griggs Recreation Center near Glenn Robertson Drive.

A rendering shows what the proposed Thread bike and walking trail might look like in the Calumet Village neighborhood.

http://lagrangenews.com/wp-content/uploads/sites/37/2016/07/web1_ThreadCalumetWEB.jpgA rendering shows what the proposed Thread bike and walking trail might look like in the Calumet Village neighborhood.