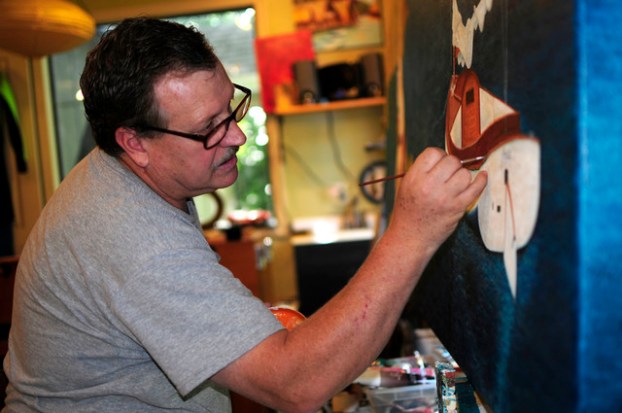 LaGRANGE — Stepping into artist Ray Stewart’s home studio, the smell of paint immediately hits you in the face.

The small, garage-like space in his backyard is packed with painting materials, containers, and paintings both finished and in progress. Also stored around the room are random bits and pieces he uses to make his assemblage art, collages of items from pieces of musical instruments to printing plates for old newspapers and leftover construction bits from his days as a contractor.

Inside the studio Thursday, he was working on his last pieces to prepare for his upcoming exhibit at The Suffering Artist gallery in Hogansville.

He put details on a piece he said will be the final in the show, while off to the side another painting sat in progress with a photograph as reference clipped to the canvas.

“I’m not sure if that one will be part of the exhibit or not,” he said. “It depends on how it comes out, if I like it or not.”

The exhibit will be more than a series of Stewart’s paintings. His first solo show, he is planning a series of pieces that will tell a story. The story, as he envisions it, will follow tragedy, depression and recovery, but the real story is in the mind of the viewer.

“You don’t spell out the narrative; you let people choose their narrative as they go,” he said. “… Some people get more into it, they’ll try to think things through or see things into it. It’s kind of where this show is at.”

The pieces range with large paintings, small abstract pieces and the assemblage art.

The narrative style is “something new, because I have a solo exhibit, to weave everything together with a thought to convey the narrative,” Stewart said. “… Some of these pieces are obviously abstract and by themselves, people come and everybody will have their own idea about a piece. … It’s not like going to a movie … and everybody walks out understanding what that was about. At an art show everybody walks out and some people have this idea about it and some people have a different idea.”

Stewart has been painting for about 20 years. Although he said he has been drawing all his life, he first tried painting to expand on the elements — and add color — to his work, then never looked back.

Many of his paintings focuses on people and landscapes, and he is inspired by other artists as well.

“I have lots of different kinds of art that I admire, a lot of times that’ll inspire me,” he said.

The assemblage art is a newer exploration. The works usually convey an emotion through a connected theme of the parts used.

For example, one of his works features a piece of an old newspaper plate with an article about Mary Jo Kopechne, who died during a crash while in a car driven by U.S. Sen. Ted Kennedy in 1969. Around the article, the piece features parts of instruments and is stringed to look like one, conveying a “sad song” for a tragic incident.

Conveying an emotion or idea through a piece of art is one of Stewart’s focuses, but he enjoys spurring viewers’ interpretations and conversations.

“That’s one of the fun things about going to an art exhibit like this, where you’ve got a lot of people and everybody’s looking at it,” he said. “You need to talk to them and find out what they think.”

LaGRANGE — In just about every way imaginable, it was sweet. A group of youngsters representing Sweetland Amphitheatre who won... read more