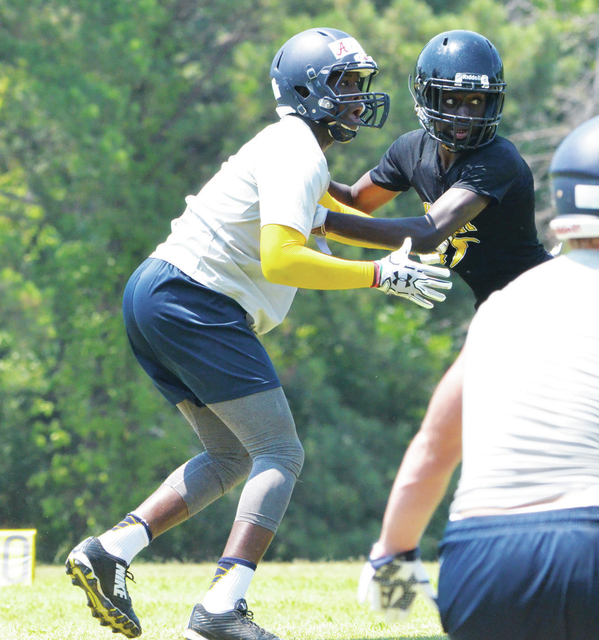 LAGRANGE – It’s been a different kind of summer for Troup High’s King Mwikuta.

A year ago, Mwikuta was getting ready to join the Troup football program as an incoming freshman, and he knew it was likely he wasn’t going to get any varsity playing time, and he didn’t.

A lot can happen in a year.

Mwikuta has grown physically, and he has worked extremely hard to develop into an impact football player on the defensive side of the ball.

Mwikuta, who has grown about three inches and added around 30 pounds since last summer, has drawn interest from some of the country’s top programs, including Alabama and Georgia, and he already has a whole bunch of offers on the table.

Mwikuta has visited with Georgia head coach Kirby Smart multiple times, and he has sat down with Alabama’s Nick Saban as well.

That’s heady stuff for a player who, a year ago, was on no one’s radar outside of the Troup High camp.

“Blowing up and getting this, it’s an experience,” Mwikuta said. “I just thank my coaches for it, my family, my grandma. I think all of them for it. I love them, I appreciate it, and I’m thankful for everything they’ve done. And I hope in the future we have a good season.”

As grateful as Mwikuta is for the attention from colleges, he knows he still has everything to prove on a football field, and he’s ready to do it.

“Like coach (Tanner Glisson) said, it’s based on my potential,” Mwikuta said. “That’s why I got all these offers. As of now, I haven’t played one down of varsity football. Not one down. But, I think I can’t just can’t get a big head about this. I get offers, and I tell them I appreciate it and I hope to see you in the future.”

Mwikuta arrived at Troup as a defensive back, but he has been working as an edge rusher this season.

With Mwikuta’s size and speed, he appears poised to do big things this season, although Glisson said there’s still plenty for him to work on.

Mwikuta is also having to learn how to deal with the attention that comes along with being a high-profile recruit.

“The biggest thing is he’s in the spotlight, so you have very little room for error,” Glisson said. “You post something politically incorrect on your Twitter, or you spell something incorrect, everybody wants to criticize everything you do. I’m just trying to teach him to think before you speak, double-check everything you put in writing, all those things. And that’s just the process. It’s learning how to talk to the media. Once you say something and they print it, you can’t take it back. He’s handled it pretty well.”

Glisson encourages Mwikuta to take college visits, and he has accompanied him on a handful of them.

“I want him to do that all he wants to, especially in June,” Glisson said. “Once it starts getting closer (to the season), it’s about the people in the room. It’s abouit us. We won’t let those outside things distract us.”

Mwikuta is hoping to be a part of a turnaround season.

As a freshman, he watched as the Tigers struggled through a 1-9 season.

While things are looking up this season, Mwikuta knows there are no short cuts to success.

“You just have to keep working hard,” he said. “And we’ve got a long way to go. Other than that, when the season comes, we’ll be ready.”

Troup defensive end King Mwikuta gets in position during an 11-on-11 scrimmage against Harris County last week. Mwikuta is being heavily recruited by some of the country’s elite programs. Kevin Eckleberry | Daily News

http://lagrangenews.com/wp-content/uploads/sites/37/2016/07/web1_King1.jpgTroup defensive end King Mwikuta gets in position during an 11-on-11 scrimmage against Harris County last week. Mwikuta is being heavily recruited by some of the country’s elite programs. Kevin Eckleberry | Daily News

Troup’s King Mwikuta is looking to have a big sophomore season as a defensive lineman. Kevin Eckleberry | Daily News

http://lagrangenews.com/wp-content/uploads/sites/37/2016/07/web1_King2.jpgTroup’s King Mwikuta is looking to have a big sophomore season as a defensive lineman. Kevin Eckleberry | Daily News