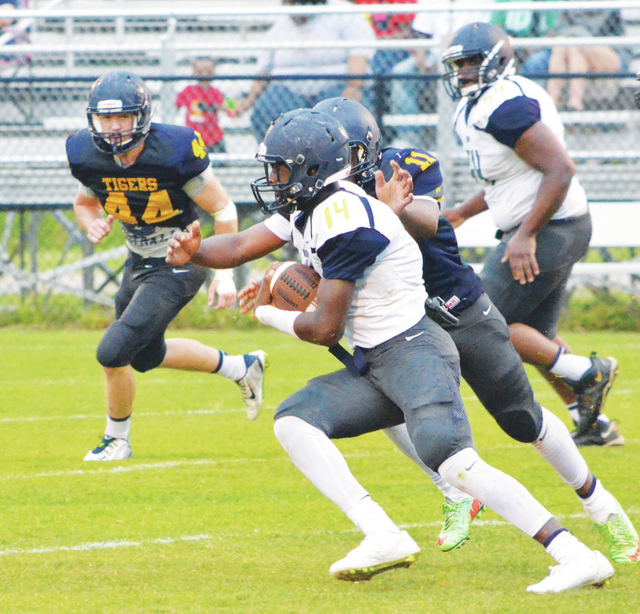 LAGRANGE – Troup High’s Montez Crowe figures the offense has a chance to do some special things this season.

There are some key men to replace.

The offensive line was hit hard by graduation, and some gifted play-makers, including electrifying running back Mess Bonner, have moved on as well.

Crowe looks at the pieces in place, though, and he figures the sky’s the limit when it comes to the Troup offense.

“I think we’ve got everything together,” said Crowe, a junior quarterback. “We’ve got running backs, when they get to the hole, they’re gone. And we’ve got senior wide receivers.”

As for the offensive line, Crowe said “it’s strong and physical.”

A critical part of the offensive puzzle, obviously, is the quarterback position.

Crowe headed into the 2015 season hoping to earn the starting job, but it didn’t happen, although he did see significant playing time as the year went along.

When Troup ended the season by beating Whitewater for its only win, it was Crowe at quarterback, and he came up big that night.

Now, Crowe has spent a year in the system put in place by offensive coordinator Kelby Holt, and he said he is feeling “way more comfortable.”

“I’ve had a year of it,” he added. “Last year, everybody was new to it, and I got beat out. But this year, since I’ve got a year of experience, I think we’ll be doing good.”

Holt, who came to Troup along with head coach Tanner Glisson in the spring of 2015, said Crowe has been a terrific student.

Crowe has been splitting the snaps with highly-touted freshman Kobe Hudson, who is receiving interest from college teams even though he hasn’t taken a college snap yet.

Crowe has done what he can to help his teammate along.

When the season comes around, Crowe will be surrounded by some explosive players, including senior running back Camren Russell, who averaged 16 yards everytime he touched the ball, and one of his favorite targets will be senior wide receiver Chanse Hill.

Crowe, meanwhile, has the ability to do big things on any given play, even if things don’t go as scripted.

Crowe said a quarterback’s value is especially evident on plays where things do go wrong.

“It’s my job to keep things together when they don’t go right, and to keep everybody up,” Crowe said.

As for Hudson, who has been turning a lot of heads, Holt said he provides a nice balance to Crowe.