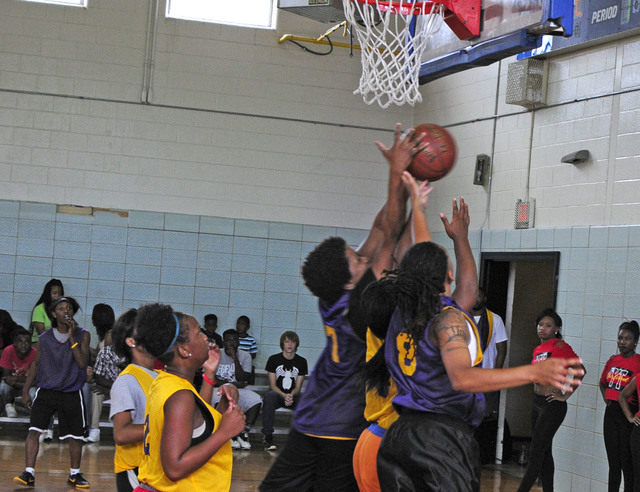 LaGRANGE — The William J. Griggs Recreation Center on Saturday was full of cheers, the sound of a dribbling basketball and squeak of sneakers on the gym floor for a game organized to benefit the annual back-to-school program Haircutz & Stylez 4 Kidz.

The back-to-school event, approaching its ninth year, has been annually organized by Michael Fannin, a third grade teacher at Callaway Elementary School, as part of the group Positive Contributions. The event — previously called just Haircutz 4 Kidz — has grown each year and not only offers the free haircuts for youngsters, but is a full-fledged event featuring games and activities on the Griggs center grounds, and it provides children in need with school supplies.

This year, Fannin decided to host a fundraiser to help him with the cost of the event. He tapped partners Maggie Porter and Mitch Hill to help conceive a benefit.

“I’ve never done a fundraiser for my Haircutz 4 Kidz, so I talked to a few people,” he said. “I wanted to figure out a way to raise money to put this event — Haircutz & Stylez 4 Kidz — on blast, so why not do a basketball game?”

The game featured two games, one for males and one for females, with opposing teams of rookies and veterans. The rookies team was composed of players from high school ages to 24. The veterans were ages 25 and up.

The first in what Fannin hopes will be an annual event, Saturday’s game was bittersweet. Hill, who helped Fannin organize the event, passed away the day before. Attendees held a moment of silence before the start of the game in his memory.

However, Fannin was encouraged by the turnout.

He was thankful to those who attended, participated and helped him organize the event. He said the proceeds will help pay for the activities, food and supplies offered during the event, and, Fannin hopes, help tip the barbers who volunteer their time to help.

“Haircutz and Stylez 4 Kids … it’s important, it’s a positive thing that the community gets to be a part of … as far as helping the kids, the less fortunate,” Fannin said. “It gives them the opportunity to come in and get a haircut. We feed the kids and it’s just a fun day. … Fun day, inexpensive day for the parents, and it lets (the children) have fun.”

This year’s Haircutz & Stylez 4 Kidz is set for Aug. 14 at 1 p.m. at the Griggs center with entertainment, games and food.

Players divided into teams Veterans and Rookies jump for the ball during a charity basketball game on Saturday at the William J. Griggs Recreation Center on Glenn Robertson Drive. The game benefited Haircutz & Stylez 4 Kidz, an annual event to offer free hair cuts and supplies for children.

http://lagrangenews.com/wp-content/uploads/sites/37/2016/07/web1_web0711BasketballBenefit-1.jpgPlayers divided into teams Veterans and Rookies jump for the ball during a charity basketball game on Saturday at the William J. Griggs Recreation Center on Glenn Robertson Drive. The game benefited Haircutz & Stylez 4 Kidz, an annual event to offer free hair cuts and supplies for children.