He’s ready to get back on the court 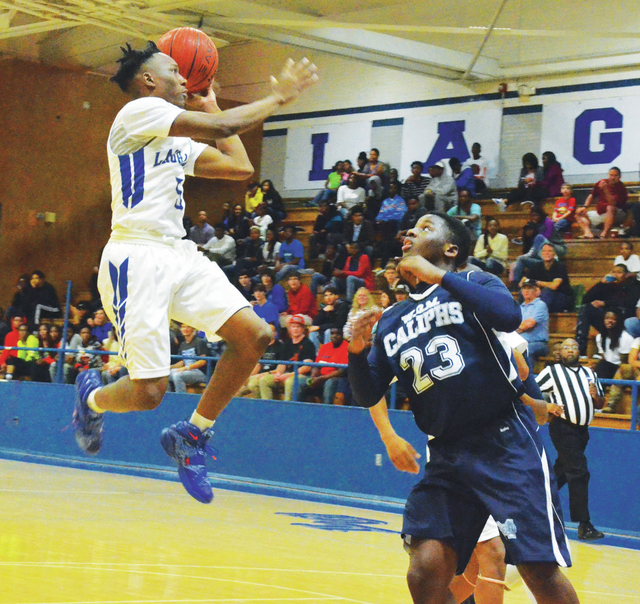 LAGRANGE – All he wants to do is play the sport he loves.

For the better part of two years, former LaGrange High basketball standout Don Leak has been unable to do that.

Leak played his freshman season at Cowley Community College in Kansas, but he has been sidelined the past two seasons due to injury issues.

After discovering a knot on his leg, he sat out what would have been his sophomore season, and he hoped he’d be able to come back strong after sitting out.

Unfortunately, when he returned, he ended up suffering a broken leg, and he was unable to play during the 2015-2016 season.

Now, after four surgeries, Leak believes he’s back at 100 percent, and he’s ready to get back on the court and resume a college basketball career that has been sidelined for two years.

Leak, who has been working out at his gym at LaGrange High throughout the summer, has signed with Rogers State University in Oklahoma, and he’ll be a member of the basketball team for the upcoming season.

“I really like the coach,” Leak said of Justin Barkley. “He’s a young guy. He’s been honest with me since Day 1. He said he was saving that one spot for me. I have a lot of faith in him.”

Leak will be heading to Rogers along with someone he knows well.

Baron Smith and Leak were teammates at LaGrange High, and they were together at Cowley Community College last season.

Now Smith and Leak, who were a part of some special teams at LaGrange High, will be members of the Division II program at Rogers State.

“We’ve been playing together since middle school, so I’m glad I get to go up there with him,” Leak said.

Leak’s difficulties began when he was preparing for his second season at Cowley when he said he “noticed a knot on my leg.”

“So they told me to take that year off, and see if it would heal up on its own,” Leak added. “By the summer of that year it did, and I went and put a plate in (the leg).”

The hope was that the plate would bolster the leg and prevent further issues, but that’s not the way things worked out.

Leak was in the gym working out when he jumped, and when he landed, a bone in his leg gave way.

“When I jumped, it snapped,” Leak said. “That noise of two loud pops is still in my head. I just laid on the floor.”

Leak had another surgery and had a rod inserted in his leg, and any chance he had of playing in the 2015-2016 season was done.

Leak was discouraged, and he admits that at the point he thought his basketball career might be over, but soon enough he was ready to get back to work and focus on returning to the court.

The leg healed, and Leak began the rehab process, and for the past few months, he hasn’t been limited in what he can do in the gym.

While he worked to improve physically, he also set out to find a new college home.

It was a challenge, finding a school willing to take a flyer who hadn’t played in a competitive game since the 2013-2014 season.

One of the schools that showed major interest in Leak was Rogers State.

“They came and talked to me when I was in Kansas, when I was hurt,” Leak said. “They wanted to see if I would get better. So I was sending videos every week. And I sent them to other schools. I went and worked out in Rome, at Shorter. But they didn’t call back. So I was just trying out everywhere.”

LaGrange High head coach Mark Veal, who was an assistant coach when Leak was in high school, said his gifts as a player made sure he’d find a college home, despite his injury problems.

Eventually, Rogers State offered Leak a scholarship, and he accepted.

“He’s ready for a fresh start, and hopefully these injuries are behind him,” Veal said.

Leak, whose most recent surgery was in August, beleives he’s ready to go.

“I’ve got my agility back. I’m quicker,” Leak said. “Sometimes I’m cautious when I jump. But it feels good. But I’m still hestitant. But I’m able to spring down and back and nine seconds now. It’s getting much better.”

Veal, who has kept an eye on Leak this summer, said he is looking better each time he comes into the gym.

“Teams may say they’re gambling on Don. But Don’s been up here in the gym, playing with our guys, and we’ve worked him out,” Veal said. “He’s really progressed since April. You can really see he’s getting better and more mobile, and teams are aware of that.”

Leak said he’s appreciative of everyone who has been there for him during some trying times.

“I’m thankful for that,” he said. “I prayed every day that my leg would get better. With the help of my family, they were there the whole way.”

Smith transferred to Cowley from Southeast Community College in Nebraska.

LaGrange High graduate Baron Smith has signed a letter of intent to play basketball at Rogers State University in Kansas. Smith played for Cowley Community College (Kansas) last season. With Smith at his signing ceremony was Don Leak, a teammate of his at LaGrange High and Cowley. Contributed photo

http://lagrangenews.com/wp-content/uploads/sites/37/2016/07/web1_Smith2.jpgLaGrange High graduate Baron Smith has signed a letter of intent to play basketball at Rogers State University in Kansas. Smith played for Cowley Community College (Kansas) last season. With Smith at his signing ceremony was Don Leak, a teammate of his at LaGrange High and Cowley. Contributed photo