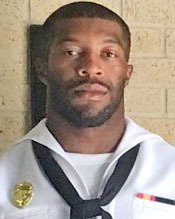 The Navy specifically trains budding masters at arms in essential tasks like personnel and vehicle inspections, communications and tactical team movements. Sailors also learn how to do things like use pepper spray to subdue a hostile suspect or defuse a dangerous situation and pick up the skills to ward off an attacker while maintaining control of their own weapon.

They also are instructed on the Uniform Code of Military Justice and the Manual for Court Martial, which guides whether a military police officer has jurisdiction to arrest a fellow sailor for a crime.

Once finished at Lackland, masters at arms get more specialized training, depending on the job they want to pursue, which ranges from military police to anti-terrorism, force protection, protective services, corrections, intelligence and working with military dogs.

The capstone event of boot camp is “BattleStations 21,” an exercise aimed at giving recruits the skills and confidence they need to succeed in the fleet. “BattleStations 21” is designed to galvanize the attributes of sacrifice, dedication, teamwork and endurance in each recruit through the practical application of basic Navy skills and the core values of honor, courage and commitment.

Jacob Tucker is the son of LaGrange Councilwoman Norma M. Tucker. He is the grandson of Carrie and Jesse Hightower of LaGrange and Dallas Tucker of Atlanta.