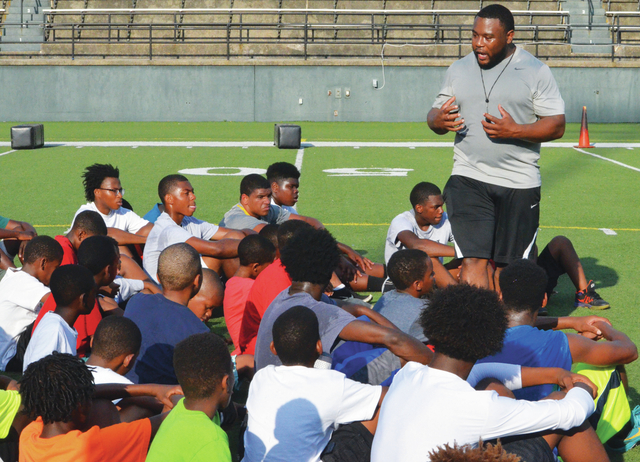 HOGANSVILLE – One of his favorite parts about the youth football camp he offers each year is seeing his players interact with the youngsters.

Pete Wiggins, Callaway High’s head football coach, has been offering a youth camp for the past seven years, and this year’s camp session was held on Tuesday morning at the school’s practice field.

As always, Wiggins had a number of his players out on the field lending a hand.

Reminiscing to his younger days, Wiggins said he knows it means a lot to the campers to have the high-school guys on the field with them.

“I remember when I was a young guy in elementary school, and I remember what I thought of the older football players, the high-school guys, and you really look up to those guys,” Wiggins said. “They want to be like them. It’s really special to see them come out here and interact in a positive way.”

The staff for Tuesday’s three-hour camp session included several of the players, as well as Wiggins and Callaway’s other coaches.

Among those coaches were former Callaway High players Jamal Bruce and Jason Boatman, who both introduced themselves to the campers at the start of Tuesday’s session.

“When Jamal Bruce introduced himself, it was great to listen to him tell them he played here not too many years ago,” Wiggins said. “And Jason Boatman, that was the same thing. It was neat for me to hear that. They’re excited about being out here today, and excited about being out here with the young people. It’s good to see former Cavaliers moving on and coming back.”

Deyano Martin, one of Callaway’s assistant coaches, said it’s always a treat to get out on the field and work with the young players.

“It’s always fun getting out here with the little kids, watching them run around,” Martin said. “And they want to win. They’re competitive.”

“That always helps,” Martin said. “They look up to them. They tell them their names, and they remember it during the season.”

Terry Hayes, one of the veterans of the coaching staff, has been helping out at the camp since its inception.

“I enjoy it. It’s fun,” Hayes said. “And it’s great exposure for the kids. They do a great job teaching drills, and the kids love it.”

The campers were put through a number of drills, and they finished their time on the field by participating in a scrimmage, with coaches Matt Napier, Kareem Douhne and Dusty Hubbard serving as the quarterbacks.

After the campers left the field, they were each treated to lunch, and they got a T-shirt to take home with them.

“We have fun with it,” Wiggins said. “We try to teach the kids technique and skills, but it’s about relationships, and reaching out to the youth, and seeing our older guys communicate with them, and just having a good time. That’s what it’s about. It’s a great day for all of us.”

OF NOTE: For more photos from Tuesday’s camp, check out facebook.com/LDNsports

Callaway’s Dominique Carter congratulates one of the campers after a big play. Kevin Eckleberry | Daily News

http://lagrangenews.com/wp-content/uploads/sites/37/2016/07/web1_camp6.jpgCallaway’s Dominique Carter congratulates one of the campers after a big play. Kevin Eckleberry | Daily News