Columnist: An early lead matters a lot in a presidential election 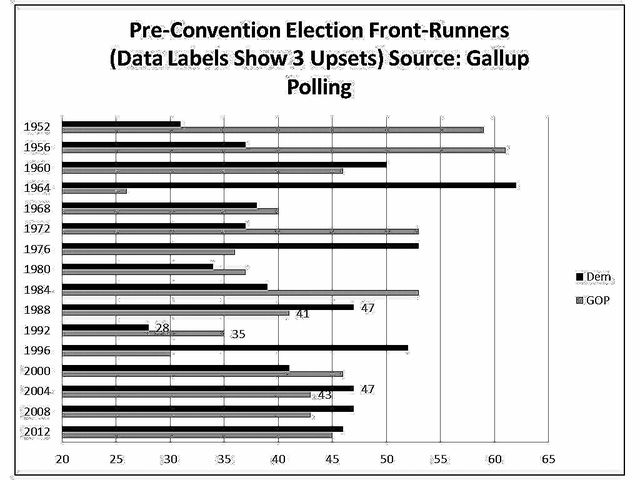 You’ll hear all kinds of stories about how some last minute twist or turn, even a conspiracy theory, altered an election. But in reality, most voters make up their minds long before the final stretch of the campaign.

In fact, the leader going into the political conventions has won more than 80 percent of all presidential contests since the early 1950s according to Gallup polling.

Some assume they don’t have to do very much. Like the kid cramming for an exam or waiting until the last minute to start the research paper, it usually doesn’t end well for the student. Those who got an early start on studying or doing their homework tend to fare better, in school and in elections as well.

Candidates who fall behind similarly feel they have all kinds of time to make up the difference. November’s a long way away, right? There’s always the prime-time convention speech to woo millions of viewers — or bore them — as well as the flood of advertisements, which make many want to change the channel, or the debate zinger — or sometimes, the debate gaffe.

Yet these beliefs ignore the reality that thanks to our long, drawn out primary process, we have a pretty good idea who the candidates are. Not only that, but we also know what many of their attack lines and slogans will be, and have heard them for months. If you don’t know them by June, you’re really not going to be all that interested in the November election.

This bodes well for Hillary Clinton. She vacillates between a narrow and a larger lead in national polls and surveys in battleground states. Polls flip around based whether Trump has made another gaffe, or whether Clinton has to sweat out a ruling on her email server, but she holds at least a slight front-runner position.

Such early leads are more important than we originally thought. Eisenhower opened up huge advantages in the polls in 1952 and 1956, as did Johnson in 1964, Nixon in 1972, Reagan in 1984 and Clinton in 1996. Carter’s giant advantage in early surveys helped him withstand a furious rally by President Gerald Ford in 1976. Even Kennedy in 1960, Nixon in 1968, Reagan in 1980, Bush in 2000 and Obama both times held slight advantages over their rivals, giving their campaigns an early front-runner status, making it their race to lose.

In only three cases did the leader before the convention wind up losing. Michael Dukakis held a 6 point lead in 1988 before the Democratic National Convention in Atlanta, but couldn’t hang on. Clinton trailed Bush in July of 1992, but that was when it was still a three person race with Perot in the mix.

Believe it or not, John Kerry narrowly led President George W. Bush in July of 2004, only to lose by an equally narrow margin in November. None of these leads were very large.

So there’s still some hope for the Donald Trump fans. But it takes special dynamics, like Perot dropping out in 1992, and front-runner overconfidence, as was the case with Dukakis and Kerry, along with a more focused pair of Bush campaigns that made up the early setbacks, something Hillary Clinton should be wary of as she hopes to make it 14 of 17 early front-runners going on to win the November election.