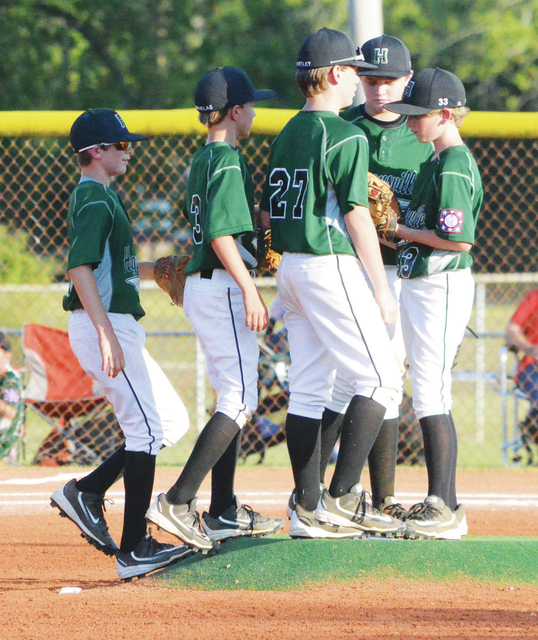 HOGANSVILLE – They were so close.

One year ago, the Hogansville 11-12-year-old all-stars reached the championship game of the Dixie Youth Baseball state tournament, only to fall short.

It was Albany American advancing to the Dixie Youth Baseball World Series with a 9-1 victory, while Hogansville’s stellar summer season concluded with a second-place finish in the state tournament.

Flash forward a year and Hogansville is back at state, and this time it will be looking to be the last man standing in the eight-team tournament that gets under way on Friday in Macon.

Four of the eight teams will return the following weekend for the semifinals, and the state champion will earn an invitation to the World Series.

Five Hogansville players who were on last year’s runner-up team are back this summer, and seven of the players were on a 9-10-year-old team that placed second in the state in 2014.

Since the first day of practice earlier this summer, the team’s primary objective has been to get over the hump, to be the team celebrating a state title rather than watching someone else hoist the trophy.

“That’s been our goal, to be state champs,” Hogansville head coach Scott Thompson said. “We’ve been runner-up two years in a row. This is our year. We feel good about it.”

Hogansville was tested in the district tournament, particularly by the rival Troup National team.

Those teams played three thrilling games in the district tournament, all decided by one run.

In the third and final game, it was Hogansville outlasting Troup 3-2 to take the district crown, and both teams qualified for the state tournament.

Nothing came easily in the district tournament for Hogansville.

Hogansville trailed in three of its four games, although it did rally to win each of them.

In the championship game, Chase Williams pitched a complete-game gem, Daniel Martin hit his second home run of the tournament, and Tre Mosley had an RBI single.

Hogansville opened its district state with a dramatic 5-4 win over Troup National in a game where it trailed 4-2 heading into the sixth inning.

Zack Thompson and Nate Lee had back-to-back RBI singles in the sixth inning to tie it, and Brett Haynes won it with a base hit in the seventh inning.

Williams was the starting pitcher in that game as well, and he threw six lock-down innings, and Trey Hartley tossed a scoreless seventh inning.

Hogansville followed that up with a 4-2 victory over Manchester, and Hartley and Jacob Karvelas each threw three innings.

Lee and Karvelas each had RBI doubles, and Haynes knocked in a run with a base hit.

With a chance to wrap up the district title, Hogansville instead lost a 5-4 heartbreaker to Troup National in extra innings.

Hogansville had a 5-2 lead heading into the final inning, but Troup National scored four runs to win it.

Zack Thompson was sharp in his 6 1/3 innings, and Lee and Mosley each had RBI doubles, and Austin Skiff had an RBI single.

Showing a lot of perserverance, Hogansville returned to Thomaston the following day and beat Troup National to sew up the district title.

That championship game was nearly a month ago, and Hogansville has had plenty of practices since then, although it has been unable to play a scrimmage game.

“Since district, we haven’t been able to scrimmage anybody,” Thompson said. “Most of the travel teams have either had a World Series or another tournament, and there aren’t many district teams left that you can play that are still together. We’ve just had to mix it up a little bit, do some different things. We’ve had a couple of different drills that we’ve been working on. And now, these last two days, we’re just going to work on fundamentals. We’ve got to be able to hit, pitch well, and play good defense.”

Coach Scott Thompson huddles with his Hogansville players following a victory over Troup National in the district championship game. Hogansville will begin play in the state tournament on Friday. Kevin Eckleberry | Daily News

http://lagrangenews.com/wp-content/uploads/sites/37/2016/07/web1_hogansville1.jpgCoach Scott Thompson huddles with his Hogansville players following a victory over Troup National in the district championship game. Hogansville will begin play in the state tournament on Friday. Kevin Eckleberry | Daily News

Hogansville will begin play in the state tournament on Friday in Macon. The top four teams will return the following weekend to determine a state champion. Kevin Eckleberry | Daily News

http://lagrangenews.com/wp-content/uploads/sites/37/2016/07/web1_hogansville2.jpgHogansville will begin play in the state tournament on Friday in Macon. The top four teams will return the following weekend to determine a state champion. Kevin Eckleberry | Daily News